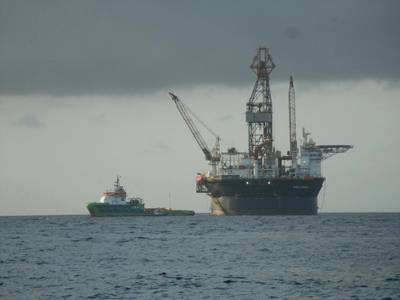 Tug Fairmount Sherpa towed rig Sevan Louisiana safely from Singapore to Curaçao. During the 11,500 miles voyage via Cape of Good Hope, stops were made in Port Louis (Mauritius), Walvis Bay (Namibia) and Port of Spain (Trinidad) to take bunkers and for crew changes.

Sevan Louisiana is a so called Ultra Deep Water rig (UDW), built in 2013 at the Cosco shipyard in Nantong, China, for UK-based Seadrill Ltd. The self-propelled rig, equipped with eight thrusters, can accommodate up to 150 crew members.

After arrival in Curaçao the Fairmount Sherpa performed multiple cargo runs for the Sevan Louisiana. The rig will leave Curaçao on her own thrusters for her next job in the Gulf of Mexico. Fairmount Marine is a marine contractor for ocean towage and heavy lift transportation, headquartered in Rotterdam, the Netherlands. Fairmount’s fleet of tugs consists of five modern super tugs of 205 tons bollard pull each.