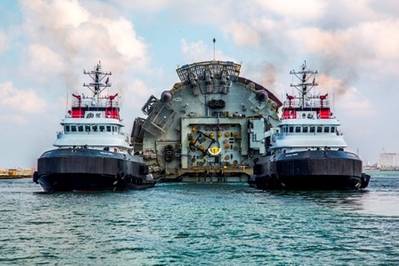 On the heels of the recent delivery of Olympus, the largest tension-leg platform ever to be developed for the U.S. Gulf of Mexico, Crowley has once again shown support for the domestic petroleum industry by providing ocean towing and positioning support services for the Lucius spar in the Gulf of Mexico for Anadarko Petroleum.

As they did during the Olympus project, the Crowley ocean class tugs worked together in both nearshore and offshore waters to relocate the spar – a type of floating oil platform typically used in very deep waters and anchored to the seabed by way of a spread mooring system. During the first stage of work, the nearshore phase, the Ocean Wind and Ocean Wave provided assistance by towing Lucius away from Corpus Christi. The Ocean Sun was also available and equipped to provide assistance, if needed.

Relocation to deeper waters marked the beginning of the second phase of work, the offshore stage. Here, the Ocean Wind and Ocean Wave maintained their positions and towed the Lucius to its final location. In the final stage, the positioning phase, the Ocean Wind, Ocean Wave and Ocean Sun helped hold the platform in its final location, and remained on site in a star pattern to provide support as the spar was connected to its moorings and made storm safe in 7,100 feet of water.

The project continued with transport of the rig’s sub cellar deck, which is the lower of the two decks of the spar topside structure. This was transported aboard Crowley’s Marty J, the first of Crowley’s eight 400-foot by 105-foot-wide high-deck strength barges and towed by the Ocean Sun. Conclusion of the project will come as one of the ocean class tugboats tows Lucius’ 9000-ton topside module atop Crowley’s 400 foot by 130-foot wide, high-deck strength barge Julie B from Corpus Christie, Texas, along the same 300 mile route as its preceding parts.

“This was another successful pairing of Crowley’s new ocean class tugboats and high-deck strength barges,” said Crowley’s John Ara, vice president, solutions. “With each project, our crews and customers gain a better understanding of the full potential of our new equipment.  As a result, we’re now being awarded an increased scope of work with more intricate involvement in these major installations.”

Crowley’s ocean class tugs are modern ocean towing twin-screw vessels with controllable pitch propellers (CPP) in nozzles, high-lift rudders and more than 147 MT bollard pull. The first two ocean class vessels, the Ocean Wave and Ocean Wind, are classed as Dynamic Positioning 1 (DP1) tugboats and are twin-screw, tugs with an overall length of 146 ft., beam of 46 ft., hull depth of 25 ft. and design draft of 21 ft. The second two tugs of the class, Ocean Sky and Ocean Sun, are classed as DP2 and are 10 feet longer. All four vessels are capable of rig moves, platform and Floating Production, Storage and Offloading (FPSO) unit tows, emergency response, salvage support and firefighting.

“Just as they did during the recent Olympus tow, these specialized tugboats are proving themselves as workhorses for our valued upstream energy customers and for companies and government entities needing long-range, high-capacity, ocean towing along with salvage and emergency response support,” said Crowley’s Todd Busch, senior vice president and general manager, technical services. “They continue to solidify our standing as an industry leader in ocean towing, salvage and offshore marine support.”

Beginning in 2014, Lucius will produce oil and gas through a truss spar floating production facility. It will have a nameplate capacity of 80,000 barrels of oil a day (BOPD) and 450 million cubic feet of gas a day (mcf/d).

First Subsea, part of the First Tech Group based in Aberdeen, has won the inter-array cables protection contract from DEME…