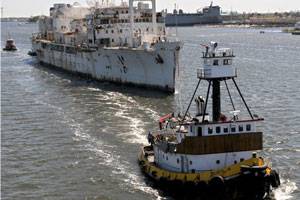 The vessel's maiden voyage with the new engines began in Jacksonville, Florida continued to Norfolk, Virginia and ended in Key West, Florida.  The Elsbeth III traveled over 1,498 nautical miles.  Equipped with a Mitsubishi S16-MPTA as center main engine supplied by Laborde, another Smith Maritime deep sea tug, Elsbeth II, served as the lead vessel for the sinking of the Vandenberg.

"We've worked with Laborde in the past when powering other vessels, such as the Elsbeth II, and they've always been first-class people," said Smith.  "They respond quickly to parts orders and our calls for information, while providing great support for their products.  If a problem ever arises, they go all out to correct it."

Elsbeth III continued 3,827 nautical miles from Key West to Ensenada, Mexico to pick up a 300' construction barge and will route back through the Panama Canal and travel 4,598 nautical miles to Oran, Algeria.  By the time the tug returns to homeport in Green Cove Springs, Florida, she will have covered over 17,000 nautical miles with very few stops and three, new reliable Mitsubishi engines.

Smith Maritime's vessels operate primarily between the US, Caribbean and South America.  Throughout its 38 years, it has towed craft of every description all over the world.  The company designed its four tugs, Elsbeth, Elsbeth II, Elsbeth III and Rhea, with maximum horsepower packaged in a stable, shallow draft hull.