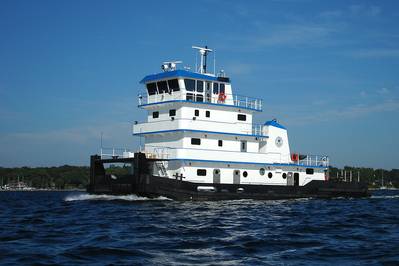 Eastern Shipbuilding Group, Inc. announced on January 23, 2013, that Florida Marine Transporters, Inc. had exercised more options for up to five additional 90’x32’x10’ Inland Towboats. In December of 2012, the M/V Blake Boyd, the 55th Towboat built by Eastern, was delivered to Florida Marine. This ongoing series of towboats originally began with a 25-vessel contract with on-time deliveries starting in 2006. It has expanded to become the largest single towboat build contract in history. The additional five vessel contract is being constructed from the design furnished by Gilbert Associates, Inc. of Boston, Mass.

These five vessels will be the first in the series with EPA Tier 3 main propulsion engines and generators delivered to Florida Marine. The vessel is powered by two Caterpillar 3512C Tier 3 diesel engines rated at 1,500 HP at 1,600 RPM provided by Louisiana Power Systems. The reduction gears are direct coupled Twin-Disc Model MG-5600 with a 6.04:1 reduction supplied by Stewart Supply, Inc. of Harvey, Louisiana. Electrical power is provided by two 99kW John Deere 4045AFM85 99KW Tier 3 generator sets rated for 60 Hz, at 208 VAC provided by Kennedy Engine Company of Biloxi, MS. These diesel engines comply with the current EPA Tier 3/MARPOL control of emissions of nitrogen oxides from marine diesel engines.

Dutch shipbuilder Royal Bodewes on Friday launched and christened the latest newbuild in a series for U.K.-based shipping…