US Warship Departs for Final Deployment 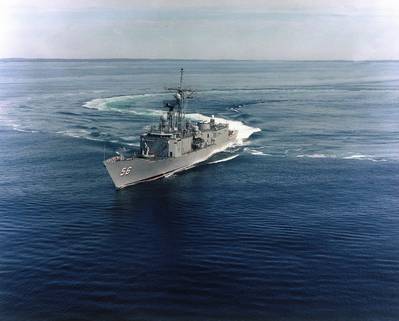 Simpson returned from her last 6th Fleet deployment just eight months ago and recently got underway with the Iwo Jima Amphibious Readiness Group and 24th Marine Expeditionary Unit completing a unit exercise designed to prepare the ship for a wide-range of warfighting missions.

As one of the few remaining Oliver Hazard Perry-class frigates, Simpson excels as a multiwarfare platform and stands ready to answer any and all tasking in the U.S. 6th Fleet area of operations.

Simpson was commissioned Sept. 21, 1985, and named for Rear Adm. Rodger Whitten Simpson, who commanded USS Mahan (DD-364) and Destroyer Division 15 during World War II. During his years of combat duty in the Pacific, Simpson was awarded the Navy Cross, Silver Star and Legion of Merit for rescuing and evacuating more than 7,500 Allied prisoners of war and civilians interned in Japanese concentration camps.