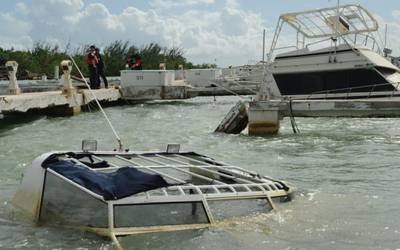 Weather and climate-related disasters cost the United States a record $306 billion in 2017, the third-warmest year on record, the U.S. National Oceanic and Atmospheric Administration (NOAA) said on Monday.
The report from the federal agency underscores the economic risks of climate change, even as President Donald Trump's administration casts doubts on the causes of it and has started withdrawing the U.S. from a global pact to combat it.
NOAA said western wildfires and hurricanes Harvey, Maria, and Irma contributed to making 2017 the costliest year on record. The previous record was $215 billion in 2005, when hurricanes Katrina, Wilma, and Rita slammed the U.S. Gulf Coast.
Average annual temperatures for the contiguous United States were 54.6 degrees Fahrenheit (12.6 degrees Celsius), 2.6 degrees Fahrenheit above the 20th century average and the third warmest since recordkeeping began in 1895, following 2012 and 2016, the agency said.
Scientists have long concluded that carbon dioxide and other emissions from fossil fuels and industry are driving climate change, leading to floods, droughts, and more frequent powerful storms.
Trump's administration has promised to boost U.S. oil, gas and coal production.