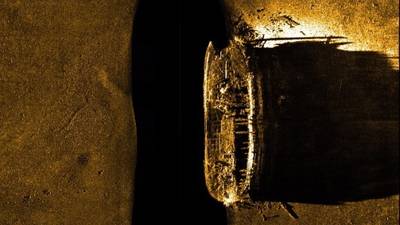 On May 19, 1845, HMS Erebus and HMS Terror of the Royal Navy departed Greenhithe, England, on a much-heralded Arctic expedition in search of a Northwest Passage. Under the command of Sir John Franklin, with Captain Francis Rawdon Crozier second in command, the expedition’s two ships set out with a total complement of 129 officers and men. The two expedition ships were last seen entering Baffin Bay in August 1845.

Since 2008, there have been six major Parks Canada-led searches for the lost Franklin Expedition ships, pain-stakingly covering many hundreds of square kilometers of the Arctic seabed. The initial discovery of a ship belonging to the Franklin Expedition, made by side-scan sonar towed from the Parks Canada research vessel Investigator, was confirmed on September 7, 2014, using Parks Canada’s remotely operated vehicle.

Harper said, “I am pleased to announce that the Franklin Expedition ship located by the Victoria Strait Expedition in September has been identified as HMS Erebus. The locating and identifying of this ship goes a long way to solving one of Canada’s greatest historical mysteries.”

The confirmation was made by Parks Canada underwater archeologists, following a meticulous review of data and artifacts observed from the Arctic Ocean’s seabed and using high-resolution photography, high-definition video and multi-beam sonar measurements.

On September 30, 2014, it was confirmed that the ship is HMS Erebus, the Hecla-class bomb vessel constructed in 1826, named after the dark region in Hades of Greek mythology called Erebus. This announcement comes just three weeks after remains of the ship were found in the eastern stretches of the Queen Maud Gulf off the western coast of the Adelaide Peninsula.

“I would like to congratulate and pay tribute to all those involved in locating and identifying HMS Erebus, Harper said. “I had the privilege of witnessing the remarkable dedication and skills of the search team first-hand during this year’s Northern Tour and it has left a lasting impression. I wish them well in their search for HMS Terror.”

The Government of Canada’s partners for the 2014 Victoria Strait Expedition included Parks Canada, Fisheries and Oceans Canada, the Canadian Coast Guard, the Royal Canadian Navy, Defence Research and Development Canada, Environment Canada, and the Canadian Space Agency, as well as the Governments of Nunavut and Great Britain.