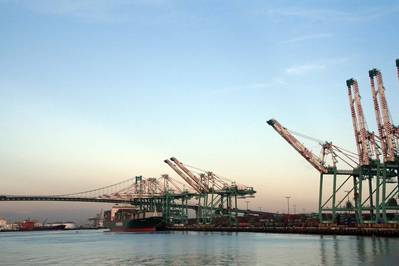 Four women dockworkers have filed federal discrimination claims against the shippers' association that runs 29 ports on the U.S. West Coast, saying they unfairly lost pay and seniority after becoming pregnant.

Male dockworkers who temporarily left to serve in the armed forces got benefits denied to women on pregnancy leave, one of the workers, Tracy Plummer, said in an interview. Another woman with a complicated medical history said she tried to work during pregnancy for fear of losing seniority and suffered a miscarriage, according to her complaint.
The dockworkers made the allegations with the U.S. Equal Employment Opportunity Commission against the Pacific Maritime Association, which represents major shippers and terminal operators, as well as the International Longshore and Warehouse Union (ILWU), one of the women's lawyers said.
Gillian Thomas, an American Civil Liberties Union lawyer representing the women, said the claims could ultimately involve hundreds of women.
Legal claims involving gender and pregnancy discrimination are not uncommon but have received more attention after a series of powerful men have left or were fired from their jobs in entertainment, the media and politics for sexual harassment and discrimination.
A spokesman for the Pacific Maritime Association declined to comment on the claims.
Jennifer Sargent Bokaie, an ILWU spokeswoman, said women are granted appropriate pregnancy leaves. She said the ILWU had not seen any of the EEOC charges.
Plummer, who works at the Los Angeles/Long Beach Ports, said she had to miss significant hours in 2015 and 2016 after she became pregnant with her second child.
Unlike dockworkers injured on the job or who entered military service, Plummer, 42, did not receive seniority credit for hours she would have worked, which she said has delayed her ability to gain full union membership and a more stable schedule.
Sargent Bokaie, however, said pregnant women have been treated fairly. "In reality, there is no policy or practice of granting hours credit for absences of any kind, except for military veterans as required by federal law," she said. "The ILWU and our employers have a liberal policy of allowing longshore workers abundant leave as needed for pregnancy."
Feeling "Punished"
The traditionally male-dominated ports, which employ about 14,000 dockworkers, have increased the number of women workers in recent years.
West Coast ports handle nearly half of all U.S. maritime trade and about 70 percent of the country's imports from Asia. Dockworkers regularly drive utility tractors, which help bring containers off ships, operate cranes and other heavy equipment.
Some of the EEOC claims were filed last year, and none have been previously reported.
Thomas, of the ACLU, said the women filed amended charges on Thursday, seeking to expand previously filed claims to cover all women on the West Coast impacted by port policies regarding pregnancies.
The EEOC has not made any findings regarding the allegations, Thomas said, and the women could file a lawsuit in federal court once the EEOC process concludes.
Longshoremen at the West Coast ports are grouped in a hierarchy, with full union members at the top enjoying the highest pay and most predictable shifts.
To increase seniority, some women work as much as possible, Plummer said, including surprise night shifts. She had a daughter in 2015, and when she returned to work, she said, she was not given accommodations to pump enough breast milk at work and had to stop nursing her daughter early.
Now she sees workers who started working at the port after her moving into senior positions.
"I feel like I'm being punished because I wanted to bear a child," she said.