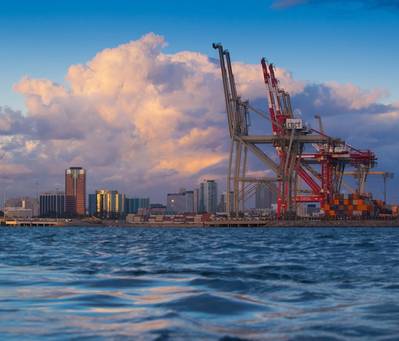 Major cargo shippers and the union representing dockworkers at 29 U.S. West Coast ports have agreed to talks on a possible extension of their current contract, which is set to expire in mid-2019, the two sides said in a joint statement on Tuesday.

Negotiators for the Pacific Maritime Association (PMA) and the International Longshore and Warehouse Union tentatively plan to meet on Nov. 1-2 to discuss the proposal, which comes about 19 months after a contract settlement that capped months of labor strife and shipping disruptions at the ports.
Severe cargo slowdowns, blamed by each side on the other as pressure tactics during the last round of talks, reverberated through the U.S. commercial supply chain, snarling trans-Pacific trade in industries ranging from agriculture to automobiles.
The shipping companies and terminal operators are eager to ensure continued labor stability at the ports for as long as possible, avoiding a potential repeat of disruptions that by some estimates could have ended up costing the U.S. economy billions of dollars.
The two parties said a joint statement "may be issued" following the November meetings, but no additional comments would be made prior to the talks.
But sources for the two sides said negotiations on a possible contract extension were proposed to the union in a recent letter from James McKenna, chief executive of the PMA, which serves as the shippers' bargaining agent.
The current five-year contract, which expires on July 1, 2019, covers 20,000 dockworkers at ports handling nearly half of all U.S. maritime trade and more than 70 percent of the nation's imports from Asia.

Global commodities trader Trafigura said on Friday it had formed a joint venture with U.S. refiner Phillips 66 to build a…