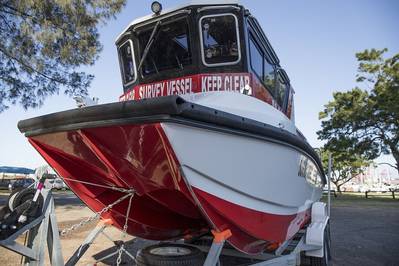 Transnet National Ports Authority (TNPA) has taken delivery of a new survey craft as the latest acquisition in its Dredging Services division’s ongoing fleet replacement program in excess of $28 million. The vessel, valued at approximately $220,000 was built by a local company in Durban.

The new craft has been named SS Sonar.

“Although the survey craft is one of the smaller vessels in our dredging fleet, it is a critical tool for keeping our ports at the correct depths for safe navigation. We use the survey craft to conduct single beam hydrographic surveys around the ports as well as measuring the physical environment underwater for any potential impact on marine activities,” he said.

He said the TNPA dredging fleet plays a vital role in facilitating economic growth within the country by ensuring our ports’ entrance channels, basins and berths are well maintained.

“Critical to the success of dredging is the need for world-class dredging vessels, especially as we continue to welcome an influx of container vessels larger than 10,000 TEUs which has resulted in the demand for berth dredging increasing threefold,” he added.

Gabriel said it was inspiring to see new entrants into the boat building market.

The new vessel was designed, manufactured, assembled, commissioned and delivered to TNPA’s Dredging Services division by local company, Dams Maintenance and Industrial Supplies cc, on time and within budget.

The Black owned family company based in Woodview, Durban, has a Broad-Based Black Economic Empowerment (B-BBBEE) Level 1 status and scooped the contract through a competitive tender process in which the contractor satisfied all technical, B-BBEE and price evaluation criteria. Dams sub-contracted certain elements to Hansen Boatz and Toyz cc  - t/a  Durban Yamaha.

The order was received from TNPA in November 2019 and the craft was completed five days ahead of schedule on 26 March 2019.

Creating an enabling environment for the growth of local ship building and ship repair is a key focus for the South African Government’s Operation Phakisa: Oceans Economy program in which TNPA is a lead implementing agent.