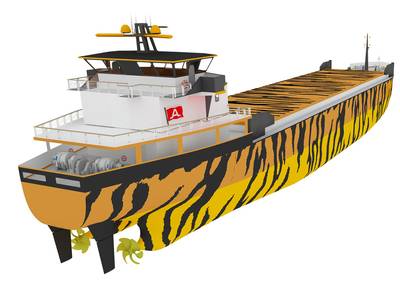 Japan's e5 Lab Inc. and Mitsubishi Shipbuilding Co., Ltd., will provide the design for “ROBOSHIP,” a standard hybrid electric propulsion vessel the two companies are seeking to promote as a vision for the future of ships, for a 499-ton biomass fuel carrier being built by Honda Heavy Industries Co., Ltd.

ROBOSHIP will be designed to use a standard system package comprising the hardware for electric propulsion, including propellers, motors, switchboards, storage batteries, and generators, together with the software to safely and efficiently control this equipment; a system able to handle a cargo ship of up to around 749 tonnes. The ship foregoes conventional diesel engines in favor of a hybrid system of large-capacity storage batteries and generators to drive the propulsion motors. The adoption of Mitsubishi Shipbuilding’s high-performance twin skeg ship design shoud lower propulsion horsepower by more than 20%, reducing CO2 emissions during cruising, and allowing the ship to navigate completely CO2-free during port operations such as freight loading and unloading, pier docking and undocking, and entering or leaving port. The generators are capable of switching between eco-friendly fuels including liquefied natural gas (LNG), hydrogen, ammonia, biofuel, and synthetic fuel, allowing all operations, including navigation, to be CO2-free.

In addition, the design will be optimized for noise and vibration reduction, as well as  improved steering capabilities that make pier docking and undocking operations easier. Further, in the future, the mass production of ships equipped with this standardized system will lower costs, which will accelerate the widespread adoption of electric propulsion vessels.

The vessel to be equipped with this system is being built by Honda Heavy Industries for Asahi Tanker Co., Ltd. After completion and handover in April 2023, the ship is expected to operate as a biomass carrier for Aioi Bioenergy Corporation. It will also be equipped with the Marindows digital platform developed by Marindows Inc., utilizing communications and digital technologies to support the digital transformation (DX) of the coastal vessel industry.