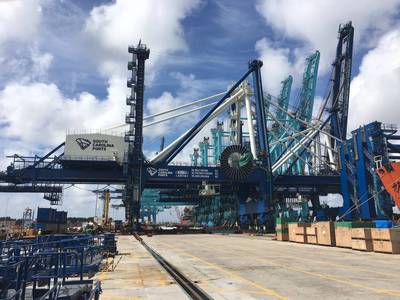 "The Port closed the FY2016 books with solid financials, reflecting our commitment to achieving the necessary performance to support our aggressive capital investment plan," said SCPA Board Chairman Pat McKinney.

"With modest container volume growth in spite of a tepid world economy and operating earnings up over last year, SCPA is well-positioned to continue moving forward with key strategic projects and above-market growth," said SCPA president and CEO Jim Newsome.

The Port reported its strongest July on record for pier container volume, or box volume. SCPA handled 100,366 boxes at the Wando Welch and North Charleston terminals, exceeding the previous July record of 99,972 pier containers set in 2005.

"Both loaded import and export volumes were up in July, providing a strong start to fiscal 2017," Newsome said. "We believe in setting ambitious targets and expect this year's volume goals to be achieved through strength in the automotive segment, increases in specialized cargo like refrigerated cargo and plastics, continued expansion of our cargo base and solid fundamentals in the Southeastern port market."

Board Action
The Board approved a contract for design consulting services for the two new ship-to-shore cranes for the Wando Welch Terminal, which are expected to be delivered in December 2017. The Board also approved the purchase of replacement crane spreader bars.