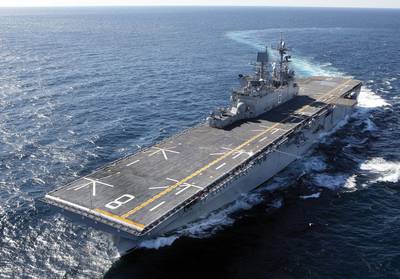 USS Makin Island (LHD 8) is the last in a series of 8 amphibious assault ships of the WASP-class built by Northrop Grumman Shipbuilding at its Pascagoula, Miss. shipyard. Though last, it is the first in the series fitted with hybrid electric gas turbine propulsion, and recently returned to its San Diego homeport after its first deployment. “During the seven-month deployment, the ship’s hybrid-electric propulsion system saved more than four million gallons of fuel resulting in an estimated cost savings in excess of $15 million,” the Navy claims. Maritime Reporter looks at the technology that makes this possible.

Commissioned in 2009, Makin Island uses diesel-electric propulsion at speeds under 12 knots and is the first amphibious assault ship to be powered by gas turbines, used at higher speeds. The diesel-electric/gas turbine combination results in lower fuel consumption, reduced carbon emissions, and lower annual refueling costs. The earlier vessels in the series are fitted with steam plants, which were also used for generating the electricity for onboard consumption. Eliminating the steam plant also reduces engineering department manning requirements and workplace hazards associated with boiler systems.  The purpose/mission of USS Makin Island is to embark, deploy, and land elements of a Marine landing force in an Amphibious Assault by helicopters, landing craft, and amphibious vehicles. The secondary/convertible mission for Makin Island is that of sea control and power projection. The shis has an overall length of 258m (847 ft.), overall breadth 36m (118 ft.) and design draft of 8.2m (27 ft.). The waterline length is 237m (778 ft.), waterline breadth 32m (106 ft.) and maximum draft is 8.5m (28 ft.). The gross tonnage of the vessel is 12,821 and displacement 41,649 tons.  The ship can carry up to three LCACs or 39 Expeditionary Fighting Vehicles (EFVs). The typical aircraft load-out is 12 CH-46 Sea Knight helicopters or 10-12. MV-22 Osprey tilt-rotor aircraft, 4 CH-53E Sea Stallion helicopters, 7AH/UH-1 attack/utility helicopters, six AV-8B Harrier attack planes (6 F-35B Joint Strike Fighters in the future), and 2 MH-60S Search and Rescue helicopters. The ship typically embarks with approximately 100 officers and 1,100 crew, and can carry about 1,700 Marines.

(As published in the January 2013 edition of Maritime Reporter - www.marinelink.com)