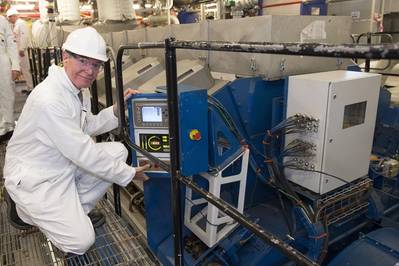 U.K. Royal Navy aircraft carrier HMS Queen Elizabeth has produced power from her onboard diesel generators (DGs) for the first time, marking a significant stage in the program.

Firing up the diesel generators for the first time in Rosyth was Philip Dunne, Minister of State for Defense Procurement, who took part in a short ceremony and was accompanied by Rear Admiral Henry Parker representing the Ministry of Defense on the Aircraft Carrier Alliance (ACA), and Sir Peter Gershon, the Independent Chairman of the ACA.
Dunne said, “It is a real pleasure to be back in Scotland, home of the U.K.’s shipbuilding industry, to witness the impressive progress that is being made on our new aircraft carriers.”
He continued, “Powering up the diesel generator today marks an important milestone on the journey to bring these highly versatile ships into service with our Armed Forces. They will be the largest, most capable and effective surface warships ever constructed in the U.K. The build program is supporting thousands of jobs across the country, with over 4,000 of those jobs at Rosyth and the Clyde.”
The 65,000-metric-ton flagship for the Royal Navy has undergone months of preparation work by the Aircraft Carrier Alliance (ACA) to start the first of her four Wärtsilä diesel engines, which are directly coupled to the General Electric (GE) generators. Together, each power unit weighs approximately 200 metric tons – the weight of 200 family-sized cars.
The four diesel generators provide a minimum of 39 MW generated power. To put this in perspective, that would be enough to power 78,000 homes. There are two Wärtsilä 12V3B medium speed diesels directly coupled on a common bed plate to an 11 KV, 60 Hz, 10.582 MVA GE generator, producing a minimum of 8.46 MWe at a 0.8 full load power factor.
The engine itself is controlled by a Wärtsilä control system built into the main engine control unit, engine start, stop and power management functions are controlled by EPCAMS – Electric Power Control and Management System.
Each diesel generator has an independent fuel system to supply 7,600 and 10,200 liters of diesel per hour at full power.
The engines create around 95db of noise which is similar to the sound of standing next to a loud motorcycle.
Jon Pearson, HMS Queen Elizabeth Delivery Director, commented, “We’re delighted to have the Minister of State for Defense Procurement in Rosyth today to start our diesel generators for the first time. This is a huge milestone on the road to delivery and is a testament to the hard work and determination of the delivery and commissioning teams working here in Rosyth.”
“The amount of pipework, electrical connections and systems that have had to be installed, tested and finally commissioned is staggering,” Pearson added. “I’m incredibly proud of everyone working on HMS Queen Elizabeth. She is now well on the way to becoming an operational warship that will be the flagship of the Royal Navy for the next 50 years.”
The diesel generator sets will be the main cruising engines for the ship, but when higher speed is required, two MT30 Gas Turbine Alternators will also be used. Together they will produce 109MW of power, enough to power a town the size of Swindon.
Jim Bennett, Power & Propulsion Director for the Aircraft Carrier Alliance, said, “There is something particularly special about the starting of the first diesel engine on any vessel. The gentle vibration, reassuring hum and first smoke appearing from the funnel, creates a heartbeat and breathes life into a new ship. This is a great moment for the project and the Royal Navy.”
The Power and Propulsion Sub Alliance comprises of Thales UK (acting on behalf of the main Aircraft Carrier Alliance), Rolls Royce, General Electric and L3 Communications. Collectively these four companies are responsible for the design, procurement, manufacture, integration, test and delivery of all the equipment that will ultimately drive the ship. This includes some of the largest and most powerful devices used on the ships such as the diesel generators, gas turbine engines, propellers and the ship’s stabilizers.
The aircraft carriers HMS Queen Elizabeth and HMS Prince of Wales are being delivered by the Aircraft Carrier Alliance, a partnering relationship between BAE Systems, Thales UK, Babcock and the Ministry of Defense.
The Queen Elizabeth Class will be the centerpiece of Britain’s defense capability for the 21st century. Each 65,000-tonne aircraft carrier will provide the armed forces with a four-acre military operating base, which can travel up to 500 miles per day to be deployed anywhere around the world. Operating the Joint Strike Fighter Lightning II jets and a number of types of helicopter, the QE Class will be versatile enough to be used across the full spectrum of military activity from warfighting to providing humanitarian aid and disaster relief.