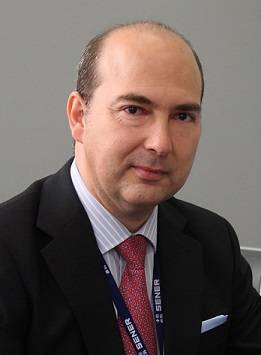 Rafael de Góngora Escrivá de Romaní has been appointed Head of the Marine Engineering Strategic Business Unit (MaSBU) and director of the Department of Engineering and Marine Systems of SENER, an engineering and technology  group that has a workforce of more than 5,000 professionals, offices in four continents and a turnover of 1.16 billion euros (2011 figures).

Rafael de Góngora leaves the position of Director of Operations of the Marine Engineering Strategic Business Unit and will strive in his new position to further broaden the international customer base of the company, focusing marketing efforts in Asia and America, but without neglecting the European market, and keep on placing SENER’s FORAN System as one of the software systems most used worldwide in the design and construction of ships and offshore devices. De Góngora is a Marine Engineer, graduated from the Higher Technical School of Marine Engineering of the Polytechnic University of Madrid (Spain) and joined SENER in 1994 as a project engineer. Since then, he has had responsibilities as project manager, sales manager of the Marine Engineering Department for Eastern Europe and, since 2006, Director of Operations of the MaSBU.