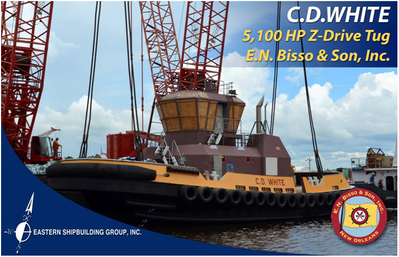 Eastern Shipbuilding Group, Inc. has announced the launching of the first of two (2) 80’ 5,100 HP Z-Drive Tugs.

The C.D. WHITE for Bisso Offshore, LLC, a division of E.N. Bisso & Son, Inc., launched on August 22, 2019. A RAL RApport 2400 Z-Drive Ship-handling Tug design was provided by Robert Allan Ltd located in Vancouver, Canada. The C.D. White is currently under construction at Eastern’s Allanton facility, along with a sister vessel, the A. THOMAS HIGGINS. The C.D. WHITE is scheduled to be delivered in December of this year.

Mike Vitt spoke about how the project commitment was reaffirmed at the 2018 New Orleans LA Workboat Show.  E.N. Bisso knew Eastern had the people and the talent given their long-term relationship, knowledge of Eastern’s workforce of skilled craftsman, the belief in the craftsmanship of vessel construction, and the efforts of the huge team effort made after Hurricane Michael in minimizing the delays of the vessels’ delivery dates.

Connie Sandras with a mighty swing broke the bottle on the first try to begin the launching of the C.D. WHITE.  The boat is named after Cornelius Dee “Jack” White, Jr. Jack White was an owner of E.N. Bisso and was married to the company’s then President Beverly Bisso White.  Mr. White was instrumental in the management and growth of the company in its early days.  It is the second boat to be named for Jack White in recognition of his place in the company’s history.

Regulatory:USCG Sub-M, Certificate of Inspection (COI) (Oceans), Designed and Built to ABS Class standards (but not classed under ABS rules)