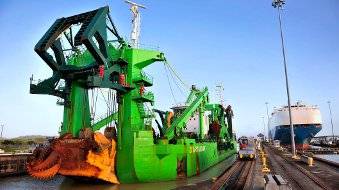 The D’Artagnan, the most powerful self-propelled heavy duty cutter suction dredger in the world, arrived at the Panama Canal January 11. Upon its arrival, the latest addition to the Panama Canal Authority’s (ACP) expansion dredging fleet then made its way to the Pacific entrance, which will ultimately link the new Pacific locks with the Canal’s existing Gaillard Cut (the narrowest stretch of the Panama Canal).

The D’Artagnan, which is able to dredge hard rock locations that previously required drilling and blasting, will complete the dredging of the waterway’s Pacific entrance. The dredger will expand the existing Pacific entrance from 192 meters to 255 meters and deepen it to 15.5 meters below the mean water springs. The D’Artagnan, which measures 123.80 meters in length, is owned by Belgian company Dredging International (part of the DEME Group).
In August, ACP Administrator/CEO Alberto Alemán Zubieta unveiled a model of the dredger during a ceremony at the Miraflores Visitors Center.