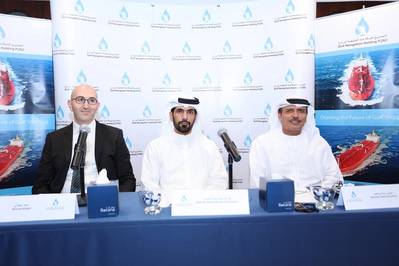 Gulf Navigation Holding PJSC (GulfNav), the Dubai-based shipping company, has announced in a press conference at Rose Rayhaan by Rotana today (Tuesday, April 19, 2016), its key expansion plans to increase its assets under management and service-based revenue.

The shipping company also revealed the appointment of Mr. Khamis Juma Buamim as the new Board Member, Managing Director and Group CEO by the Board of Directors during the event. The move forms part of the company’s intensified strategy to become one of the main industry leaders in the regional maritime and shipping industries.

Chairman Abdulla Saeed Abdulla Brook Al Hemeiri, and Mr. Khamis Juma Buamim along with other high-level executives, were present in the press conference to explain GulfNav’s strategy to grow its fleet of product and chemical tankers and reinforce its shipping services business. Historically, the lucrative chemical shipping services have provided remarkable returns for the firm.

In addition to acquisition of new tonnage, GulfNav will execute new projects and activities to contribute to turnover and profit growth over the next five years. These projects include offshore support services, increasing shipping services and marine product sales and distribution through expansion of shipping services network within the Arabian Gulf and Gulf of Oman; engaging in trip time charters by working and trading vessels on spot hire; acquiring vessels on bare boat with purchase option; purchasing work boats for offshore projects; and building global network with business stakeholders and third-party owned vessel management under the Gulf Stolt Ship Management (GSSM) umbrella.

GulfNav has acquired 100 per cent stake of GSSM which was previously a 50/50 joint venture with Stolt Neilson to develop the in-house ship management arm and ensure that its assets are managed and maintained to the highest industry standards.

Additional commenced in Jan 2016 Technical Services and Workshop under the Umbrella of Gulf Navigation Maritime LLC, which is a 100% subsidiary of GulfNav. Technical Services is proposed to be a ship repair maintenance and technical service provider. The new Service facilities will be operating out of an existing Khorfakkan base of the company and cater to the ever growing shipping needs in the northern part of the UAE (Khorfakkan, Fujairah, Ras al Khaimah) and Gulf of Oman.

Mr. Buamim, will restructure the company and lead its expansion plans to achieve new levels of growth and development. The new MD & Group CEO was previously the Executive Chairman of Drydocks World and Maritime World from May 2010 until March 2015 and has successfully led the organization through its restructuring during a global financial crisis.

An oil and gas industry veteran, Buamim was the Chairman and Chief Executive Officer of Regional Clean Sea Organization (RECSO), the Gulf oil industry organization.  Prior to joining RECSO, he was with Conoco and ConocoPhillips for 26 years in various management positions, including Vice President of Dubai Petroleum Company (DPC), a ConocoPhillips affiliate company in the UAE.

“With his wealth of experience and knowledge in businesses turnarounds, he will be instrumental in seeing through the company to restructure its balance sheet and resolve residual issues.  Most importantly, his prominent role and stellar reputation within the maritime sector make him uniquely capable to open new doors for GulfNav and create opportunities and partnerships to realize its expansion plans.  The Board of Directors has utmost confidence that Mr. Buamim will be able to steer GulfNav into a new course toward restoring its role as a key player in the maritime sector,” Mr. Abdulla Saeed Abdulla Brook Al Hemeiri, said.

Gulf Navigation Holdings PJSC, a fully-integrated ship-owning company with its own technical ship management company (GSSM), owns and operates a fleet of chemical tankers. It provides shipping services through its subsidiary Gulf Navigation Maritime LLC. The company started operations in Dubai during 2003. To this day, it remains the first and only publicly listed maritime and shipping company in the UAE.  The company is headquartered in Dubai, UAE, with a branch office in the Kingdom of Saudi Arabia.