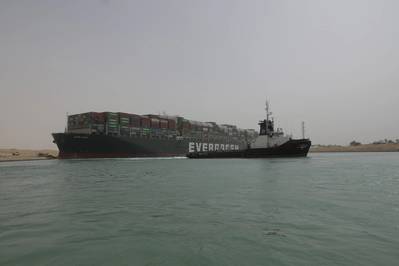 A social media post has falsely claimed the Ever Given ship that blocked the Suez Canal is carrying nuclear weapons. There is no evidence to support this – and Evergreen Line, the company leasing the vessel, told Reuters the allegation is false.

The original post has now been removed from Facebook; however, other accounts have shared a screenshot. It claims information has been leaked in the Netherlands that the “EVERGREEN was loaded with WEAPONS and NUKES”. Comments left underneath suggest some users believe the claim to be true. “This is getting deep. More tentacles than an octopus. WWIII type stuff,” one person wrote.

The posts were written in response to news on March 23 of the 400 meter-long Ever Given containership running aground and blocking the Suez Canal. The vessel was refloated on March 29, allowing travel to resume through the passage, which is where around 30% of global container traffic flows annually.

Reuters contacted Evergreen Line HQ in Taipei about the claim, which said, “We can categorically deny that any nuclear material or devices were being carried by Ever Given on its voyage that has recently been unfortunately delayed by the incident in the Suez Canal.”

Meanwhile, Nukewatch UK, a network that monitors nuclear weapon convoys across Britain, told Reuters, “The idea that the Ever Given was loaded with nuclear weapons is nonsense. If the suggestion is that some kind of terrorist organization is using Evergreen to move a nuclear bomb and other munitions, that also seems highly unlikely given how unpredictable container transport now proves to be.”

The organization explained that states are not allowed to transfer nuclear weapons to each other under the Non-Proliferation of Nuclear Weapons Treaty and that nuclear weapons moved within a state, or for deployment at a military base abroad, are moved in very specialized transport with high security.

“In the U.K., nuclear warheads are moved in 44 tonne lead-lined trucks with lots of security features to protect them from any kind of impact. No country ships them around in ordinary containers,” the spokesperson added. Images of the lead-lined trucks can be viewed on the Nukewatch UK website.

Verdict
False. There is no evidence that the Ever Given ship is carrying nuclear weapons. The company leasing the ship have said the claim is false – and the container ship is not specially equipped to carry such cargo.

(This article was produced by the Reuters Fact Check team.)