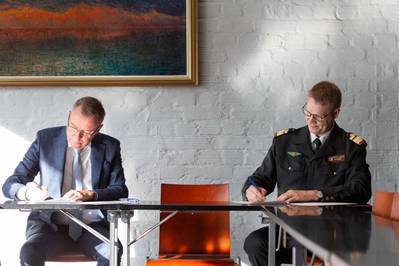 Finnish shipbuilder Meyer Turku said it has been chosen by the Finnish Border Guard to build its new multipurpose vessels.

The parties signed a letter of intent for the construction of two new vessels to replace three decommissioned patrol vessels as part of the Finnish Border Guard's Vessel Ship 2025 project.

In order to carry out the acquisition, the Finnish Border Guard organized a tender during the spring of 2021, which was won by Meyer Turku Oy. The goal is to conclude a final shipbuilding contract by the end of this year.

“This is a very important letter of intent for Meyer Turku and the entire Finnish shipbuilding network. We are emerging from the crisis caused by the corona and the letter of intent signed today will create more stability for our order book, which runs until 2026. We are especially happy that a party like the Border Guard is showing confidence in Meyer Turku Shipyard,” said Tapani Pulli, Deputy CEO of Meyer Turku.

The Border Guard maintains Finland’s internal security and is responsible for border control, maritime rescue, prevention of environmental damage and numerous other tasks. It also supports other authorities in their missions at sea and in the archipelago. The new vessels will be a key tool for the Finnish authorities in the Baltic Sea.

In the future, the Border Guard's fleet will consist of three Security-class vessels. When building ships, special attention will be paid to versatility and environmental friendliness.