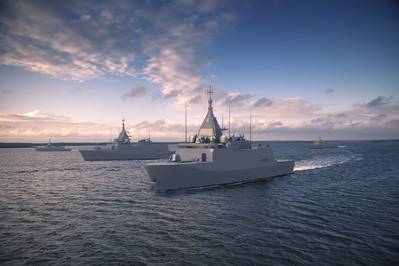 The Finnish shipbuilder Rauma Marine Constructions (RMC) won the contract from the Finnish Ministry of Defence for the construction of four new Pohjanmaa-class naval vessels, for the total cost of EUR 1.3 billion.

The design phase will resume with immediate effect and construction of the first vessel will start at the shipyard in 2022. The Finnish Government approved the procurement, valued at approximately EUR 700 million, yesterday, September 19, 2019.

Rauma Marine Constructions Oy and the Finnish Defence Forces will formally sign the agreement for the construction of the multipurpose corvettes on September 26, 2019. CEO Jyrki Heinimaa is pleased that Rauma’s long traditions of building Finnish naval ships will continue.

Rauma Marine Constructions Oy and the Finnish Defence Forces have come to an agreement regarding the construction of the new fleet of four multipurpose corvettes for the Finnish Navy. The Squadron 2020 project will replace a large number of the Finnish Navy’s existent fleet, consisting of seven vessels.

The Finnish Government approved the procurement contract today, September 19, 2019. The two parties will formally sign the construction agreement on September 26. The combat system, including weapons and sensors, will be provided by Saab, accompanied by necessary design and installation services by RMC.

The multipurpose corvettes will be delivered by 2026 and will be taken into operational use by the Finnish Navy in 2028. The procurement will have a considerable impact on employment, totalling around 3,600 person-years.

“This agreement is significant not only for its effect on local employment and businesses, but also on a national level, since at peak time, the project will employ some 1,000 people. Rauma Marine Constructions is a wholly Finnish-owned shipbuilding company, which continues the city of Rauma’s longstanding traditions of supplying combat vessels for the Finnish Defence Forces. Through this agreement, Finland will once again have a domestically built fleet, which supports our country’s security of supply”, says Jyrki Heinimaa, CEO, Rauma Marine Constructions.

Furthermore, according to Heinimaa, the project is also vital in strengthening the Finnish maritime industry and research conducted within the industry. RMC has, among other things, invested in production methods for light steel structures for the vessels and the agreement will also include new development and research projects.