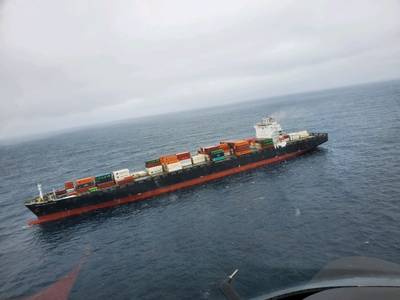 The Unified Command, consisting of the U.S. Coast Guard, the State of California, Resolve Marine and Witt O'Briens said Sunday it was coordinating the safe transit of a containership 80 miles southwest of Big Sur to the Port of Oakland, Calif. after the ship had reported an engine fire on Friday.

"The NYK Delphinus crew reported a continuous decrease in the temperature of the engine room’s surrounding bulkheads Sunday morning. No signs of smoke have been observed and all decks above the engine room are now accessible and have been fully ventilated," the Coast Guard said Sunday.

The tugboat Delta Deanna began towing the Liberian-flagged box ship in a northerly direction at 10:55 a.m., Saturday. At 2:55 p.m., the ships met the tugboat Scorpius to transfer two members to the Delphinus to survey the damage.

The Delta Deanna and the tugboats Sarah Avrick, Delta Lindsay, and Jamie Ann on Sunday continued to transit the Delphinus to an offshore location west of Point Reyes, Calif.

"Upon arrival, additional fire and salvage teams are planning to embark on the Delphinus to conduct structural integrity inspections and examine damage to the engine room. Once the inspection is completed, the Delphinus is scheduled to transfer to Oakland Terminal Berth 22," Coast Guard said Sunday.

The Delphinus contacted Coast Guard Sector San Francisco watchstanders at 4:54 a.m., Friday, reporting an engine room fire aboard the ship with 24 people on board approximately 50 miles west off the coast of Monterey, Calif.

A Unified Command consisting of the Coast Guard, the State of California, Resolve Marine and Witt O’Briens has been established to respond to the incident.

"The Unified Command's priorities are the safety and well-being of the crew, controlling the fire, mitigating pollution, and safe transit of the ship to the Port of Oakland," Coast Guard said.