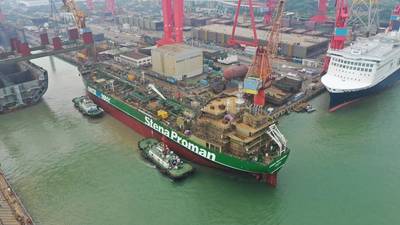 The first in a series of three new 49,900 dwt methanol dual-fuel MR tankers has been launched for a joint venture between Proman and Stena Bulk.

Construction will now continue on the water, ahead of sea trials and final delivery in the first quarter of 2022.

Over the next two years, she will be joined by another five methanol-powered newbuilds: Stena Pro Mare and Stena Prosperous, which will be Proman Stena Bulk JV vessels, and the Proman-owned Provident, Progressive and Promise. All vessels will be constructed at GSI and delivered by the end of 2023.

Each vessel will use approximately 12,500 tonnes per annum of methanol as a marine fuel. Using ‘grey’ methanol produced from natural gas, greenhouse gas (GHG) emissions in the vessels’ normal commercial operations will be significantly reduced compared to conventional marine fuels. This includes the virtual elimination of sulphur dioxide and particulate matter, 60% reduction of nitrogen oxide and a cut in carbon dioxide, offering immediate improvements to air quality around ports and coastlines.