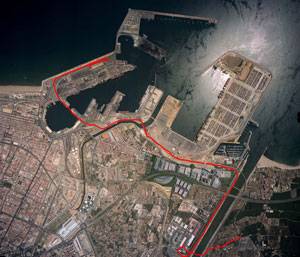 Flagship, a part EU-funded maritime transport project, has successfully implemented the first real-time optimization system targeting congestion in container terminals. The system, known as Flagship-RTS was trialed at the Port of Valencia and plans transport resources, container repositioning movements and inventory levels simultaneously, using a real time scheduling model. This allows the terminal operation to be re-optimized dynamically throughout the day enabling both air pollution and congestion to be significantly reduced, as well as generating substantial savings for logistics operators and customers.

Flagship-RTS has been designed and developed as a management tool for terminal operators, freight forwarders, ship operators and container logistics providers and delivers commercial, environmental and social benefits.  Trialed with China Shipping (Spain) and Port of Valencia the reduction in wasted container handling operations in the terminal not only greatly improved efficiency but led to less congestion and increased safety in the terminal.  Trucks and containers did less empty mileage leading to lower CO2 emissions and improving the effective capacity of haulage fleets; reducing both their operating costs and their impact on the environment.  Flagship–RTS also had a positive impact on the area surrounding the terminal reducing noise pollution, easing congestion and speeding up road traffic in the terminal vicinity.  The smoother flow of traffic in and out of the terminal allows cranes and handling equipment to be used more efficiently and safely.

Julian Stephens, Technical Development Manager at MJC² said: “The system has shown that it is capable of reducing wasted repositioning movements by up to 25% while saving 10-20% of transport costs through improved planning and faster response times. Furthermore, the project has enhanced business efficiency as well as the quality of life for those living and working in the area.”

Herman de Meester, Coordinator of Flagship commented: “The shipping industry always works hard to meet and exceed performance standards. Flagship is a fine example of the industry collaborating to deliver best practice and pushing back the performance frontiers in order to turn the exceptional into accepted norm.  Flagship-RTS was a well-planned and well executed project with great potential for wider use”