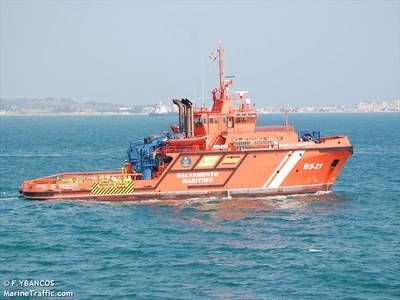 The bodies of four migrants, who died on the Atlantic Ocean in an inflatable dinghy with 34 people on board, and a survivor were brought to Spain's Canary Islands, the local maritime rescue service and an NGO said on Sunday.

"The ship Miguel de Cervantes has recovered the bodies of the four dead people found yesterday 150 miles southwest of Gran Canaria in a dinghy, from which a survivor was also rescued," the maritime rescue service said on Twitter.

The sole survivor was an "exhausted 27-year-old man" who was found by a cargo vessel on the dinghy alongside the bodies, according to tweets by Helena Maleno from Caminando Fronteras, a Spanish non-governmental organization that monitors migratory flows.

The survivor, suffering from hypothermia, was flown to the island of Gran Canaria by helicopter on Saturday afternoon, a maritime rescue service spokesperson said on Monday.

"The rest of the victims, 29 in total, have been swallowed by the ocean," Maleno added. They had left from south of Laayoune in Western Sahara.

From Jan. 1 to July 15, at least 9,308 people reached the Canary Islands from Western Africa, according to Spanish government figures, a 27,5% rise compared with the same period in 2021.