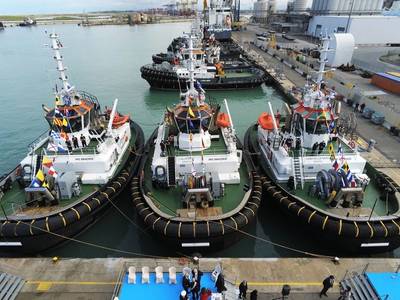 On May 15, Fratelli Neri held a naming ceremony for three Damen RSD Tugs 2513 in Livorno, Italy.

Two of the vessels, named Romito and Calafuria were built at Damen Shipyards Galati and were delivered to Fratelli Neri at the end of 2019. Both of these tugs offer 70 tonnes bollard pull in the configuration tractor tug.

The latest addition to the company’s fleet has been named Gabriella Neri, for the wife of Chairman Piero Neri. Damen built the vessel at Damen Song Cam Shipyard and delivered her in Livorno in January this year. This is the most powerful of the three, with 80 tonnes bollard pull.

All three of the tugs are equipped with FiFi1 and feature escort, oil recovery, salvage notation and are fully compliant with Italian Flag regulations. They join a fleet of several Damen tugs in the Fratelli Neri fleet.

According to Damen, the design of the RSD Tug 2513 combines characteristics of both tractor and ASD tugs to create a vessel which always sails and operates bow first. For this reason the tug is equally effective at both bow and stern towage operations the builder said.

Fratelli Neri managing director Corrado Neri said. “We are delighted to have taken delivery of Romito, Calafuria and Gabriella Neri from Damen Shipyards. The new tugs’ versatility, high power and low emissions make them an ideal addition to our existing fleet, allowing us to continue to provide the highest standard of service to our customers with safety excellence.”

“Additionally, the Gabriella Neri has the Damen Triton remote monitoring system. With Triton it’s possible to monitor the performance of the vessel in real time from the office, facilitating operational optimization.”