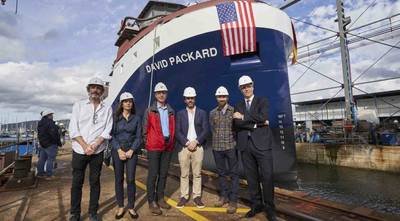 The hull of MBARI’s new flagship research vessel has been floated out at Freire Shipyard in Spain.

The new oceanographic vessel, David Packard, which entered the waters of the Vigo estuary for the first time last month, is scheduled for delivery in 2023 to the Monterey Bay Aquarium Research Institute (MBARI), a private, non-profit oceanographic research center in Moss Landing, Calif.

“The RV David Packard will be the first state-of-the-art research vessel built not only in Spain, but in the European Union, intended to operate in the waters of the United States of America and will comply with a number of requirements, both functional and operational, completely specific and unique,” said the general director of Freire Shipyard, Marcos Freire. This project, awarded at the end of 2020, “represents an unprecedented milestone for Freire Shipyard, whose launch will become part of the history of this family-owned company forever.”

Designed by naval architecture and marine engineering firm Glosten, the new vessel has a total length of 49.9m, a beam of 12.8m, a design draft of 3.65m and it can reach a speed of 12 knots. The ship will have capacity for 30 people, including a crew of 12 and a science crew of 18.

As the command center for the remotely operated vehicle (ROV) Doc Ricketts, the David Packard will allow researchers to continue exploring the deepest reaches of the Monterey Canyon and beyond. The new ship will also be capable of deploying a variety of autonomous underwater vehicles (AUVs), robots that can conduct visual and acoustic surveys, sample seawater, and map the seafloor.

Among the special characteristics of this ship, it features advanced integrated cybersecurity system in accordance with DNV requirements. It is equipped with retractable stabilizer system to reduce rolling motion both in navigation and during dynamic positioning operations, and the David Packard will also meet strict underwater radiated noise levels to operate in U.S. waters

Much work still remains for the ship following its launch into the water. Next, the Freire team will begin outfitting the ship’s interior, transitioning their focus to the vessel’s internal science and engineering systems.

Construction of the David Packard began in November 2021 with the ceremonial laying of the keel, essentially the backbone of the ship. Construction will be complete in summer 2023, then the vessel will sail from Freire’s shipyard in Spain to MBARI’s research facilities in Moss Landing, California. MBARI will begin science operations in late 2023.