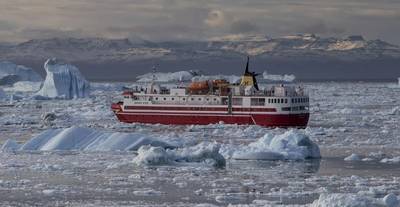 Clean Arctic Alliance has sent its second letter to Cosco, in which the NGOs urge the Chinese liner company to make public what fuel types its vessels use in the Arctic.

Responding to reports that the 190m-long COSCO-owned cargo vessel Tian’en is due to arrive in the Swedish port of Gävle on August 18, having traversed the Arctic’s Northern Sea Route between the Pacific and the Atlantic, Clean Arctic Alliance Lead Advisor Sian Prior said: “Earlier this year, the Clean Arctic Alliance wrote to COSCO requesting it make public the nature of the fuel that the Tian’en, and other COSCO vessels planning on transiting the Northern Sea Route, will be using and carrying through Arctic waters. "

"As we have yet to receive acknowledgement, we have written to COSCO again, in an effort to better understand the company’s plans for this season. Due to the risk from oil spills, and the climate impact of burning heavy fuel oil in Arctic waters, we are asking COSCO – and its customers – to commit to using and carrying only lighter distillate fuels or other cleaner alternatives instead of the world’s dirtiest fuel – heavy fuel oil (HFO) – for powering its ships in the Arctic,” she said in the letter.

“With Arctic summer sea ice less than half the extent it was in the 1970s, and half the volume, and the news that the region’s summer sea ice could reach its minimum extent ever this year, using heavy fuel oil to power shipping in the Arctic would be a poor choice. It not only increases the risk of oil spills, but also generates emissions of black carbon, which exacerbate the melting of both sea and glacier ice in the Arctic region,” she continued.

In June 2019, High North News reported that COSCO, or the China Ocean Shipping Company, could be conducting as many as 14 Northern Sea Route transits between July and October, a situation confirmed by the permits issued by the Russian government.

“Global shipping companies like COSCO should be setting an example for those who would seek to move commercial goods through the Northern Sea Route, by championing clean and renewable forms of propulsion for Arctic shipping,” said Prior.

HFO is already prohibited for use and carriage in the Antarctic, and in 2017, the International Maritime Organization’s (IMO) International Code for Shipping in Arctic Waters or “Polar Code” came into effect, including a recommendation that ships in the Arctic apply the same practices with respect to HFO.

During PPR6, an IMO technical sub-committee meeting in early 2019, IMO Member States finalised a methodology for assessing the impact of a HFO ban on Arctic ecosystems, Indigenous local communities and economies, and commenced the work needed to define what types of fuel will be banned and how they will be banned.

“The Arctic is already under immense pressure from  climate change – Greenland’s ice sheet is seeing large scale melting, and wildfires are burning across Alaska, Canada and Siberia [6]. International shipping companies wishing to use the shorter Arctic routes to move cargoes in one of the most sensitive and vulnerable regions of the world – must burden the responsibility of showing that their actions are not exacerbating the crisis. We look forward to hearing a response from COSCO,” concluded Prior.