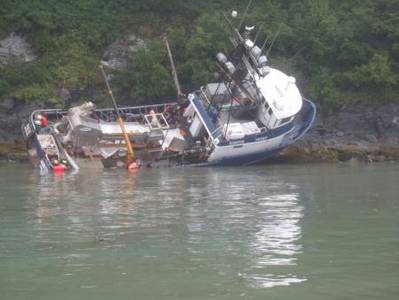 The owner of the 65–foot fishing tender, Fate Hunter, is working with Coast Guard Marine Safety Unit Valdez and State of Alaska personnel to minimize environmental impact from the grounding and refloat the vessel.

Coast Guard Sector Anchorage command center watchstanders received a call Sunday morning from the crew of the Fate Hunter, reporting the vessel had run aground near Shoup Bay with four persons on board. The good Samaritan fishing vessel Akemi responded to the scene to assist and safely transported all four persons back to Valdez. No injuries or major structural damage to the vessel were reported.

“With the crew of the Fate Hunter safely ashore, the Coast Guard’s priority is the safety of responders and preserving the integrity of the marine environment in Port Valdez,” said Lt. Keyth Pankau, response department head, Marine Safety Unit Valdez. “We are working closely with Alaska Department of Environmental Conservation to monitor response efforts.”

A slight sheen is reported in the vicinity of the fishing tender. At the time of the grounding, the Fate Hunter was carrying approximately 1,500 gallons of diesel, 300 gallons of hydraulic oil, 100 gallons of lube oil, and 150,000 pounds of fish.

The Fate Hunter is homeported in Astoria, Oregon.