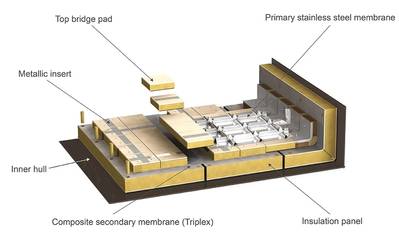 According to the engineering company its membrane technology has been chosen for the tank design which will be built by the Korean shipyards Hyundai Heavy Industries (HHI) and Samsung Heavy Industries (SHI) on behalf of Chinese based Zhejiang Satellite Petrochemical.

The delivery of the vessels is scheduled from Q4 2020 onwards.

GTT’s Mark III membrane containment system has been chosen for the design of the tanks.

The design has been optimized in order to significantly increase the capacity within the standard VLGCs1 overall dimensions, thereby offering more than 98,000 m3 total cargo capacity with limited draft. This second generation of VLECs will be the world’s largest ever built.

Designed to be multi-gas units, i.e to transport ethane and several other types of gas, such as propylene, LPG and ethylene, these six units will also be “LNG ready”, offering the possibility to carry LNG in the future without having to convert the cargo tanks.

The lower BOR2, optimized fuel consumption, and reduced power utility on one hand, as well as the higher ship speed & cargo capacity on the other hand, significantly improve the overall economics of the delivered cargo per ton to the end customer.

Philippe Berterottière, Chairman and CEO of GTT declared: "We are very pleased to receive these orders from HHI & SHI.”  He added: “Three years after the world’s First ever VLEC delivery, we are delighted to be, once again, the solution of choice for these 2nd generation ships offering a large flexibility and performance to ship-owners and charterers. "