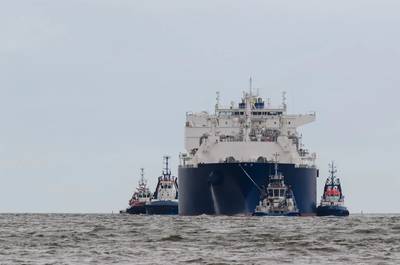 French engineering firm GTT said it has developed the NO96 Super+, an evolution of the NO96 Cargo Containment System (CCS), to help reduce the evaporation of liquefied natural gas (LNG) cargoes during operations,

Having recently received an approval in principle (AIP) from classification society Bureau Veritas, the new NO96 Super+ technology integrates insulating Reinforced Polyurethane Foam (R-PUF) panels instead of plywood boxes, used for both the primary and secondary insulation spaces, to reduce the heat ingress inside the tank. Glass wool flat joints are also inserted between adjacent foam panels to optimize the behavior of the system and ensure it the best thermal performance.

According to GTT, NO96 Super+ maintains the main features of the NO96 technology that have been key factors in its success, in particular the principle of double Invar metallic membranes and the mechanical anchors fixing the insulating panels to the inner hull.

With this innovation, GTT said it reduces once again the evaporation of the cargo during operations, NO96 Super+ offering a guaranteed boil off rate (BOR) of 0.085%V/d for the current standard size 174,000 cubic meter (m3) LNG carriers, though further reductions down to 0.08%V/d are possible for larger capacities such as 200,000 m3 thanks to scale effects.

The first mock-up using the NO96 Super+ technology was erected in February 2021 and validated the satisfactory assembly of the CCS, GTT said, adding it expects final class approval by mid-2021.

Philippe Berterottière, chairman and CEO of GTT, said, “With the introduction of NO96 Super+ technology, GTT demonstrates its ability to continuously innovate and upgrade its technologies to meet our customers’ requirements. Reducing the Boil Off Rate is key to the industry at a time when shipowners and shipyards face increasing economic and regulatory challenges.”