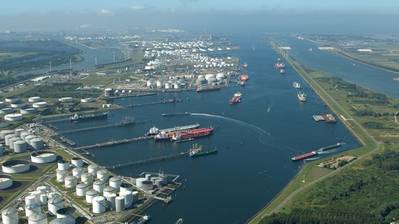 Global Energy Storage, a new company that aims to store products such as hydrogen and biofuels, said on Thursday it is buying assets in Rotterdam from commodities firm Gunvor Group and will redevelop 20 hectares (49 acres) of land in the port for its operations.

Financial details of the purchase, which includes part of Gunvor's Stargate Oil Terminal, were not disclosed.

The company's plan is to "take an existing oil terminal and develop it into a state-of-the-art low-carbon products terminal," GES Chief Executive Peter Vucins said in a statement.

GES was formed in May with backing from London-based private equity firm Bluewater. A spokesperson for the company said it has up to $250 million to invest.

Gunvor acquired the Stargate storage facility in Rotterdam, Europe’s deepest port and a hub for its oil trading, at the same time it purchased the 88,000-barrel-per-day Rotterdam refinery from Kuwait Petroleum International in 2016.

It has been looking to divest a chunk of the 1.5 million-cubic-meter storage hub since 2018, according to Reuters reports at the time.

Gunvor's Global Head of Portfolio Shahb Richyal said the deal announced Thursday would support "the development of environmentally responsible projects in the port of Rotterdam".

GES said it intends to build a new jetty at the location, and will develop infrastructure for gas storage, gas-to-chemicals production, hydrogen storage, and ammonia storage.