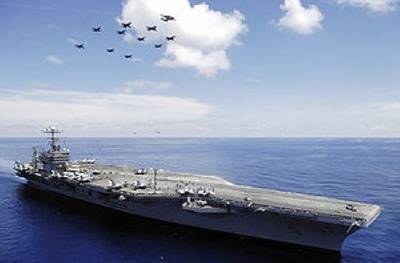 "Not only is the catapult removal process unprecedented for ship's forces during an RCOH period, but we also did it quickly," said V-2 Division officer Lt. j.g. Matt McCauley.

"It's difficult to remove more than 20 years of hardened grit in bad weather," said Chief Aviation Boatswain's Mate (equipment) Salvatore Gumina. "Pure teamwork is what makes this group of Sailors work so well, on or off land, underway or during RCOH."

V-2 Division is now taking on the task of removing the side sheathing in each catapult's trough, which will save the Navy and the shipyard even more money.