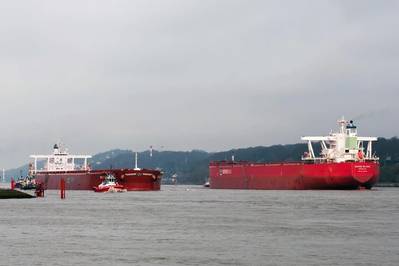 In Hamburg as a universal port, growth in bulk cargo throughput was maintained in 2015. In this important handling segment, total volume of 45.5 million tons represented growth of 5.8 percent on the previous year. In 2015 container handling at 8.8 million TEU (20-ft standard containers) did not reach the previous year’s total, falling 9.3 percent and significantly lower.

Senator Frank Horch highlighted the port’s great significance for Hamburg, warning against talking it down: “Anybody familiar with the port business will realize that the Port of Hamburg’s success cannot be measured solely in TEU. Its success is composed of many elements. What makes the Port of Hamburg strong is its character as a universal port. The Port of Hamburg is actually one of the largest and most varied industrial zones in Germany. Cargo handling, logistics and industry are closely intermeshed here and mutually cross-fertilizing. The port consists of the sum of these numerous and multi-facetted activities, something that cannot be described by throughput figures alone. I most urgently warn you against conjuring up crises. That harms our port and plays into the hands of our competitors. For us, economic fluctuations are nothing new – they are part of our business. Nobody disputes that we are confronted by great challenges. But, together, we shall master them!”

The Port of Hamburg reports around 30 percent local container cargo as well as growing seaport-hinterland container transport by rail, up by 2.8 percent, and by inland waterway vessels, up by 27.5 percent. As an industrial universal port, it performs an outstanding and indispensable function in supplying the local economy at its location and in the region, along with core markets inland.

Downturn in seaborne container throughput is primarily attributable to lower volumes handled with China, Russia and Poland. In total, in 2015 something over 800,000 containers (TEU) fewer than in the previous year were handled for these especially important trading partners in container traffic with the Port of Hamburg.

“Among the ports of Northern Europe, the Port of Hamburg has maintained its strong position on container traffic with the Baltic region. Compared to ports such as Antwerp and Rotterdam, Hamburg reports an around seven percentage points higher proportion of transhipment cargo,” explained Axel Mattern, Member of the Port of Hamburg Marketing Executive Board. “This is one of the reasons that Hamburg is more seriously affected than Antwerp or Rotterdam by weakness in China’s foreign trade and Russia’s economic problems, for example,” added Mattern. A large share of the cargoes handled in Hamburg for China and Russia is transhipped via Hamburg, and loaded from oceangoing containerships on to feederships. “Container traffic with China down by 14.4 percent and with Russia by 34.4 percent could not be offset in volume by growth in container traffic with other countries such as Malaysia, India, the United Arab Emirates or Mexico. Since the statistics for worldwide transhipment traffic feature the waterside transfer from the large container ship to the feeder or vice versa each time this occurs, any transhipment downturn doubly affects port results,” explained Mattern.

The fall in seaborne container traffic with Polish ports has also been caused by direct calls by liner container services calling Gdansk direct without transhipment at one of the North Range ports. “Such direct calls are always one alternative for shipowners to the transhipment traffic on which the majority of them nevertheless serve such hub ports as Hamburg, for example,” said Mattern. Essential for any direct calls are availability of sufficient cargo and ports equipped for handling mega-containerships.

At the joint Port of Hamburg press conference, Jens Meier, Chairman of HPA’s Executive Board, emphasized the excellent progress of the port’s hinterland services in 2015. He said that it is particularly gratifying that landside services as a whole had generated growth, and that with volume up by 3.1 percent at 45.8 million tons, rail in particular had achieved its best-ever result. “Good work pays off. With the optimization of our processes we have succeeded in positioning rail as the most important mode of transport, ahead of trucking. That is an outstanding performance in the European context. The figures show just how much potential resides in the intelligent expansion of infrastructure. We shall be further enhancing this potential,” stressed Meier at the annual press conference.

“With a 45.3 percent share of the Port of Hamburg’s modal split, rail displaced trucking, the previous leader, which with 42.7 million tons captured a 42.4 percent share. That is unique in Europe and shows that environmentally friendly rail plays a leading role in seaport traffic,” said Ingo Egloff, Port of Hamburg Marketing Executive Board Member. In 2015 container traffic by rail also set a fresh record, increasing by 2.8 percent to 2.3 million TEU. More than 200 freight trains reach or leave the Port of Hamburg every day. With 1,100 container trains per week, Hamburg leads ports such as Rotterdam or Antwerp by a wide margin. “Hamburg is the European leader for containers transported by rail, and is the top rail port. Among ports in northern Europe, Hamburg’s share of containers transported by rail is around 50 percent, while Rotterdam’s is about 19 percent and Antwerp’s roughly eight percent,” stressed Egloff. He also highlighted the fact that initial transport data indicated that in 2015 inland waterway craft achieved a 27.5 percent advance, transporting 130,000 TEU. In total, in 2015 total cargo volume transported by inland water ships was 13.6 percent ahead at 12.4 million tons. “So Hamburg has displaced Cologne as Germany’s second largest inland waterway port. On inbound and outbound transport of non-time-critical shipments, and of especially heavy and/or high-volume cargoes, the inland waterway vessel occupies an extremely important position in the carrier mix of our universal port, even relieving other carriers, and this needs to be further boosted,” said Egloff.

Up by 9.2 percent at 22.3 million tons, grab cargoes dominated in the bulk cargo sector. It was massive imports of coal, 27.3 percent higher at 7.7 million tons, which ensured growth there. Besides the steelworks of Northern and Eastern Germany, customers for these include industrial plants and power stations. Up by 12.4 percent at 9.2 million tons, suction cargo also achieved notable growth. Ahead by 28.8 percent at 4.2 million tons, higher grain exports contributed to the excellent annual result here. Down by 2.6 percent at 14 million tons, in 2015 liquid cargo throughput was slightly below the previous year’s.

In Ingo Egloff’s view, continued growth in the number of calls in Hamburg by ultra-large containerships (ULCS), which increased by 27.6 percent to 647, underlines the urgency of implementing the still awaited adjustment of the navigation channel of the Lower and Outer Elbe. “We urgently require dredging of the channel so that ultra-large vessels in particular can be more flexibly handled, and transhipment cargo in the Port of Hamburg ensures employment at the terminals,” stressed Egloff. The restrictions currently in force on the Elbe limit use of transport capacities of large ships, and are hampering ships meeting and passing, and hence more flexible traffic flow on the Elbe. “After dredging of the channel, an ultra-large containership could transport up to 1,800 additional loaded containers (TEU). In 2015 there was a further increase in the number of extra-large containerships with slot capacity of between 14,000 and 19,000 TEU, calls by these being up by 142 percent at 150. Form the safety aspect too, dredging of the channel that provides for a meeting box for mega-ships should produce advantages for traffic control on the Elbe.

The Port of Hamburg employs more than 156,000 people in the Hamburg Metropolitan Region. With gross value added of 20.5 billion euros, it is also of immense importance for the entire German economy.  To keep the universal port on its growth path, in the view of Axel Mattern and Ingo Egloff, in addition to dredging of the channel on the Lower and Outer Elbe, access and dispersal corridors for freight transport by rail, truck and inland waterway craft need to be adapted and expanded.

Given the difficulty of assessing the likely development of foreign trade in the port’s core markets, it is hard to make a forecast for 2016. The Port of Hamburg’s marketing organization therefore regards total throughput at the 2015 level as realistic.