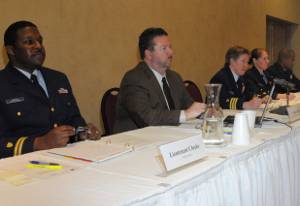 The Coast Guard adjourned the formal hearings, Thursday, March 11, concerning the Jan. 23, 2010, incident involving the tank vessel Eagle Otome, the Gull Arrow and the tug Dixie Vengeance.  The incident resulted in more than 400,000 gallons of oil being spilled into the Sabine-Neches waterway.

Summary:
Eric Lewis, the VTS watchstander, testified concerning his training, maritime experience, and the details of the displays and sensors he monitors as a watchstander.  He also described his watch and the geographic area of the waterway he monitors. He testified he was aware of the Eagle Otome as one of a number of ships, tugs and other vessels transiting that day, but did not see anything about the transit of any vessels on the day of the incident to indicate they were having difficulty.

Evan Morrow, the VTS watch supervisor, testified as to his training, maritime experience and duties as a watch supervisor. He also stated that it was not possible to determine whether a vessel was under control merely because the vessel was close to the side of the channel based on what is displayed on the VTS displays.  In addition he stated that the VTS is not allowed to give specific navigation instructions to specific vessels but can only provide information on request. Requested information may include other vessel traffic, weather, tides and currents, and range and bearing to specific points provided the vessel is equipped with an AIS transponder.

Scott Whalen, the VTS Training Supervisor, testified concerning the mission of the VTS, the information in the regular broadcasts to all waterway users and navigation information available to mariners on request.  He also testified that Captain of the Port authority was needed in certain instances to provide specific traffic direction, close waterways or dictate areas where no meeting could take place.

Captain Charles Tweedel, the President of the Sabine Pilots Association, described the role of the Association in maintaining the infrastructure to provide pilot services include maintaining and office, a dispatching service, a pilot station and maintaining and staffing pilot boats to take pilots out to ships off shore.  He testified concerning a number of guidelines and that some are currently in use while others do not represent current practice.  He also discussed the pilot training program in detail as well as the fact there is no requirement for additional training once the two year period of apprenticeship and deputyship is completed and the pilot is issued a state commission.  He also testified that the Association has no authority to review the performance of any licensed branch pilot, nor direct the decisions of any pilot on any transit. The pilots are independent contractors to the ships for which they provide pilot services and though the Association participates as a member of the South East Texas Waterway Advisory Council (SETWAC), no pilot is required to follow the guidelines developed by that organization. He also testified that he is not concerned that the pilots may not follow the guidelines of a 2 pilot transit as they are currently drafted. He also testified there is currently no provision to remove a pilot from the 'Board', that is taking jobs actively piloting other vessels, who have been involved in a marine casualty unless a medical condition limits his ability to pilot a vessel.

William Scott, the Chairman of the Jefferson and Orange County Board of Pilot Commissioners, testified as to the responsibilities of the Board and his responsibilities as Chairman. He stated no one on the five member commission has experience as a mariner. He stated that they award apprentice pilot positions to applicants, deputy positions to pilots and award commissions to pilots based on an application and interview process. They do not have any program of medical oversight, relying only on the presence of a CG issued license for the determination of medical fitness to be a pilot and their interview with the pilot for their determination of mental fitness to serve as a pilot. He also testified that the Board investigates every complaint concerning a pilot and every marine casualty involving a pilot but there have been no complaints for many years and no investigations. The Board has empanelled a seven member panel to review this incident.  When asked if the Board would also be investigating a serious marine incident involving another vessel that happened in the waterway since the incident with the Eagle Otome, he said yes. He also testified the pilot commission does not participate in SETWAC and has not issued a safety recommendation.

Various media reports have circulated stating that strong winds and poor visibility contributed to the accident.  The Coast Guard would like to stress that the "poor visibility" and the "strong winds" mentioned in the testimony occurred prior to the incident and were not present at the time of the incident.

The purpose of this investigation is to develop conclusions and recommendations that will improve vessel and waterway safety.  The facts collected at this hearing along with the lead investigator’s conclusions and recommendations will be forwarded to Coast Guard Eighth District in New Orleans and Coast Guard Headquarters for approval.  Once approved, the final investigative report will be made available to the public and the media.  No analysis or conclusions will be presented during the hearing.  The National Transportation Safety Board will generate an independent report on this incident.