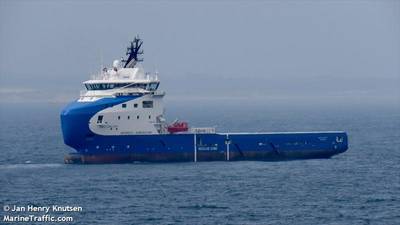 Hermitage Offshore Services (previously known as Nordic American Offshore) on August 12 filed for a voluntary petition for reorganization under Chapter 11 of the Bankruptcy Code,

It cited a prolonged slump in global oil prices, driven in part by the global coronavirus pandemic, and its effect on the company’s business, as well as the inability to reach a financial restructuring deal with lenders out of court, as the reason for the move.

Following Hermitage's Chapter 11 application, the NYSE then determined to initiate delisting procedures for the company’s common shares, to which the cash-strapped offshore vessel owner has now decided to appeal.

In a statement on Thursday, Hermitage Offshore, which provides offshore vessels the North Sea and West Africa markets, said it continued to believe that there was significant doubt as to its ability to operate as a going concern following the bankruptcy proceedings, "and can make no assurance that it will be successful in its appeal of the decision of the NYSE to delist the securities or that there will be any equity value in its common shares at the conclusion of the Chapter 11 process. "

"Nevertheless, the company has decided to appeal the delisting determination at this time because it believes that the significant uncertainty surrounding the outcome of the bankruptcy proceedings do not allow for a meaningful assessment of the company’s ability to meet the NYSE’s continued listing standards following the completion of the bankruptcy proceedings and that therefore the initiation of delisting procedures at this time is premature.

Announcing its bankruptcy filing earlier this month, the company, which owns 21 vessels consisting of 10 platform supply vessels, and 11 crew boats, said it didn't expect the move would adversely affect its business operations, while it works with lenders toward a resolution.

It said payments to customers and vendors have historically been made by one of its managers outside the Chapter 11 cases, so those due now and in the future would continue uninterrupted.