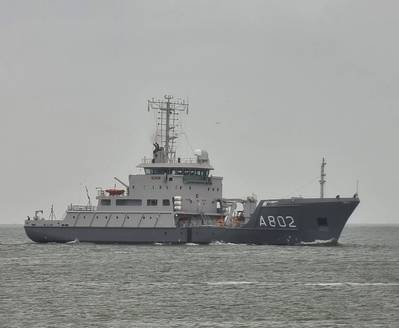 The hydrographic survey vessel HNLMS Snellius was returned to the Royal Netherlands Navy (RNLN) following its midlife upgrade at Damen Shipyards Den Helder, a nearly one year-long project with a diverse scope of work.

The Defensie Materieel Organization (DMO, the Defense Materiel Organisation of the Dutch Ministry of Defence) and the Directie Materële Instandhouding (DMI – the Directorate for Materiel Conservation) were responsible for the major maintenance work on the ship, and together they commissioned the yard in Den Helder to carry out both the mid-life update and the necessary multi-annual maintenance simultaneously.

The assignment was carried out in close collaboration with numerous partners from the Dutch maritime industry, such as Nevesbu, Wartsila, Braspenning, Eekels, RH Marine, Bakker Sliedrecht and Kongsberg. Many of the platforms and Sewaco systems were replaced or overhauled during the project. A number of works were also carried out to prepare the 15-year-old vessel for the second half of her lifecycle.

HNLMS Luymes (A803) and HNLMS Snellius (A802), which came into use in 2003 and early 2004, marked the beginning of a new chapter for the Dutch Hydrographic Service. The two hydrographic survey vessels carry out the important task of mapping the seabed. They do this in particular in the North Sea and parts of the Caribbean. The ships were built by Damen Schelde Naval Shipbuilding (DSNS).