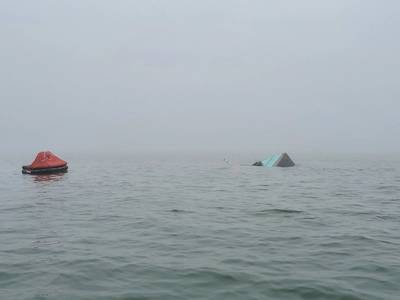 The stern of the 81-foot fishing vessel Pappy's Pride appears above the waterline beside the vessel's inflatable life raft after a collision near the Galveston jetties in Galveston, Texas, Jan 15, 2020. (U.S. Coast Guard photo by Station Galveston)

The Houston Ship Channel reopened on Tuesday morning after a seven-hour closure to raise a fishing vessel that sank in mid-January near the waterway's entrance in the Gulf of Mexico, according to the Houston ship pilots association.

The ship channel, a 53-mile waterway connecting the busiest U.S. petrochemical port with the Gulf of Mexico, reopened at 10:15 a.m. local time on Tuesday, according to the Houston Pilots, the ship pilots association.

Two people aboard the 81-foot (25-meter) fishing vessel Pappy's Pride remain missing following a collision with the 600-foot tanker Bow Fortune on January 14, according to the U.S. Coast Guard.

Another two people aboard the fishing vessel were rescued following the collision, but one of those rescued later died at an area hospital, the Coast Guard said.