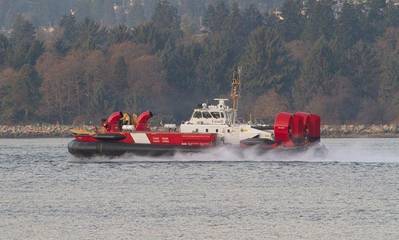 Canadian Government ministers have announced the arrival in Canada of the new hovercraft to be stationed at Sea Island in Richmond, British Columbia – the 'CCGS Moytel'.

The new hovercraft will be named the CCGS Moytel. Moytel is a Halq’emélem word meaning “to help each other.” Canadian Coast Guard vessels are given names that promote Canadian sovereignty, culture, geography and history.

As a replacement for the CCGS Penac, the new Moytel will be a heavy-duty, more versatile amphibious vehicle capable of patrolling inland waters. A larger more powerful vessel than the CCGS Penac, it has a greater range of capabilities and features including a bow ramp that will enable it to transport supplies such as rescue equipment and vehicles.

“Our investment in the CCGS Moytel, a world-class modern hovercraft, is another example of our Government’s commitment to ensure the safety of fishermen, recreational boaters, and sailors in and around Vancouver Harbour,” said Minister Wong. “The name of the new vessel is in Halq'eméylem, in recognition of our First Nations’ contribution to the province’s history, culture and economy.”

Sea Island is the home to Vancouver International Airport (YVR) and a large conservation project to offset the environmental impact the airport causes; including a wildlife preserve and public beaches.