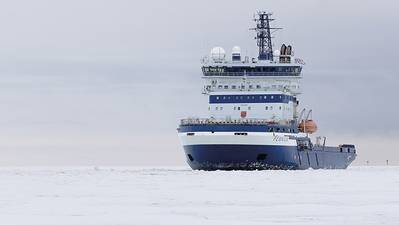 Royal Dutch Shell Plc's  icebreaker vessel Fennica returned to the Dutch Harbor in Alaska with a small breech in the hull, raising concerns about the company's plan to resume drilling in the Arctic later this month.

Shell said in June it plans to restart drilling for oil in the Arctic off Alaska as early as the third week of July after a conditional approval by the United States.
"Any impact to our season will ultimately depend on the extent of the repair," spokeswoman Kelly op de Weegh said in an e-mail to Reuters.
Fennica, owned by Arctia Offshore, is one of the primary ice management vessels in the Port of Helsinki during European winter.
Shell was given a conditional approval by the U.S. Department of the Interior in May to return to the Arctic for the first time since its mishap-plagued 2012 drilling season.
(Reporting by Sneha Banerjee; Editing by Don Sebastian)