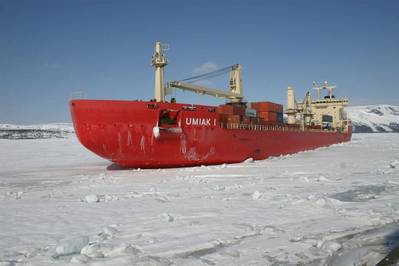 The new vessel has been ordered in order for Fednav to fulfil a long-term contract which provides for the transportation of nickel and copper concentrates from Canadian Royalties' Nunavik Nickel Project in northern Quebec to customers in Europe as well as the import from Europe of mine supplies and equipment.

The Polar Class 4, 25,000 dot vessel,will be built at Universal's Tsu shipyard, and will be classed by Det Norske Veritas. The scheduled delivery date is December 2013.

Fednav already owns and operates two of the world's most powerful ice-breaking commercial vessels, the MV Arctic and the MV Umiak I. Based in Montreal, the Fednav Group is the leading Canadian operator in the deep-sea bulk market, operates year-round in ice-covered waters, and has the world's largest fleet of ice-class vessels.

Canadian Royalties Inc. is a mining company based in Quebec and owned by Jilin Jien Nickel Industry Co. Ltd. of China through its Canadian subsidiary Jien Canada Mining Ltd.

Canadian Royalties' principal mining operations are in the Nunavik region of northern Quebec, where it owns and operates the Nunavik Nickel Project, a group of poly-metallic mines feeding a central processing facility which produces nickel and copper concentrates with significant platinum group element by-products.