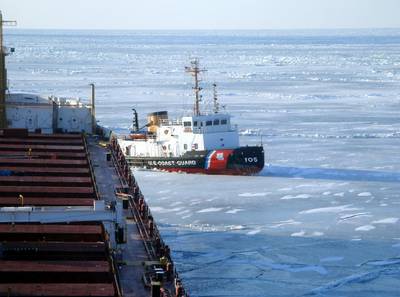 U.S. and Canadian Coast Guard icebreakers work together to break ice in these waterways as conditions worsen throughout the winter.
The Coast Guard conducts domestic ice-breaking operations for the purposes of search-and-rescue, and other operations such as flood mitigation and the facilitation of navigation to meet the reasonable demands of commerce. The Coast Guard assists with flood mitigation when assistance is requested from the U.S. Army Corps of Engineers. Other emergency operations include opening channels to icebound communities, and breaking ice for the ferries that serve them in order to ensure critical supplies of food, heating oil or access to medical assistance is maintained.
Sector Detroit provides command and control for Operation Coal Shovel, and may place restrictions or close waterways as ice conditions dictate. Due consideration is given to the need for cross channel traffic (e.g., ferries), the availability of icebreakers, and the safety of the island residents who use naturally-formed ice bridges for transportation to and from the mainland.
As the 2017 Operation Coal Shovel season begins, Coast Guard Sector Detroit and the Canadian Coast Guard will continue to monitor potential hazardous ice conditions and conduct ice-breaking operations throughout the Great Lakes. Phone conferences are conducted regularly with maritime shipping company representatives to coordinate ice-breaking services and facilitate the movement of commercial vessels.