Icebreaking Season Kicks Off in the Bay of Bothnia 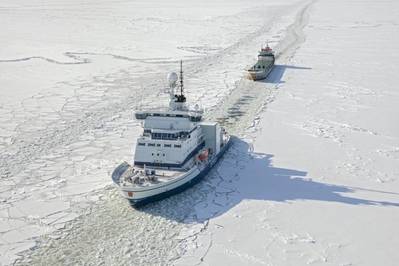 Arctia’s icebreaker Otso is set to commence this winter's icebreaking season in Finland as the first icebreaker to depart from the Katajanokka base in Helsinki on December 3.

The vessel will provide icebreaking assistance in the waters of Tornio, Kemi and Oulu in the Bay of Bothnia where it is scheduled to arrive on December 5, just in time for a forecasted spell of intense cold weather expected to accelerate ice formation in the northern Bay of Bothnia. Consequently, the icebreaking season begins approximately three weeks earlier than last winter.

Arctia’s icebreakers operate in Finland’s coastal waters, securing winter navigation which is vital to Finland’s business sector as approximately 90% of the country’s export and 80% of import is transported by sea. Icebreaker crews are at work around the clock, seven days a week. The crews are changed in intervals of 10 days, and at the same time, the vessel is refuelled and her water and food reserves replenished.

The previous icebreaking season was average in nature, spanning from Christmas Day to mid-May. At times, the Bay of Bothnia had full ice cover, while icebreaking assistance was required in the Gulf of Finland as well. As the winds were primarily mild, the ice conditions remained relatively easy to handle. However, nearly all icebreakers were active. The developments of this season’s winter conditions will be known at the latest in May after the icebreaking season ends.

Aluminum boatbuilder Brix Marine said it has delivered the newest installment of its PAXCAT portfolio, a 32’ x 12’ catamaran…