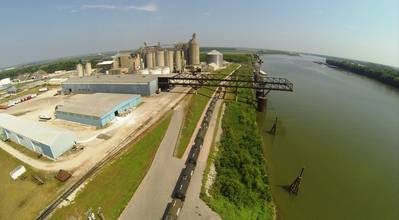 The Port of Indiana-Mount Vernon set a new annual shipping record in 2015 by handling over 6.6 million tons for the first time in its 40-year history. This was a 36-percent increase over 2014 and 30 percent higher than the previous record set in 1994. In addition to the record volume, it was also the highest annual increase in total tons handled at the port.
"The credit for the record volume rightfully goes to our world-class port companies, without them we would not be enjoying the success we have today," said Port Director Phil Wilzbacher. "By utilizing our port's multimodal connections, these companies can choose the most cost-effective logistics routes, grow their business and create commerce that extends well beyond southwest Indiana and the Midwest."
Shipments of coal, agricultural products, steel as well as other bulk commodities helped drive the year's significant increase in cargo volume. The port handled its highest steel shipments ever in 2015 nearly doubling the tonnage from 2014, while salt shipments resulted in a five-fold increase. The year also saw increases in the following commodities: ethanol (up 105 percent), coal (up 82 percent), dried distillers grain (up 64 percent), cement (up 17 percent) and limestone (up 52 percent).
For the year, the port handled approximately 3,600 barges, 37,000 rail cars and 160,000 trucks.
"This port is one of the busiest transportation hubs in this part of the country," said Wilzbacher. "To put this into perspective, if all of the barges, rail cars and trucks handled at the port were placed end-to-end, they would stretch 2,300 miles, which is approximately the straight-line distance between Washington, D.C. and Los Angeles."
The Port of Indiana-Mount Vernon contributes over $1 billion in total economic activity per year and supports 7,200 total jobs. Port companies ship cargo to or from 44 states and 20 countries.
Mount Vernon is ranked as the seventh largest port district on the Inland Waterways System. Located in southwestern Indiana approximately 15 miles west of Evansville, the port connects the Midwest to the world with year-round barge access to the Gulf of Mexico and Great Lakes through the Ohio and Mississippi rivers. The port offers potential connections to five Class I railroads and has 600 acres available for development by companies that would benefit from its multimodal connections.