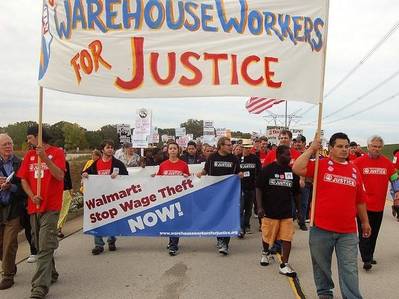 ITF inspectors visit ships to ask captains and companies to raise concerns about the way Walmart treats its US staff.

The ITF is urging shipping firms carrying cargo owned by US retail giant Walmart to raise concerns over its treatment of US warehouse workers and warning of impending industrial action at the company over the coming holiday period. They are likely to to embark on industrial action on 23 November in protest over poverty pay and the downgrading of working conditions.

ITF acting general secretary Steve Cotton commented: “Walmart is a major customer of the shipping industry, and we feel it is important that transport companies – with whom we strive to build the same kind of collaborative industrial relations we would like to see Walmart embrace – are aware of potential industrial disruption.”

He continued: “We are seriously concerned by Walmart’s attitudes towards its workers. It has been widely reported that workers in its warehouse and retail operations have been subject to firings, threats to terminate employment, and reduced hours.”