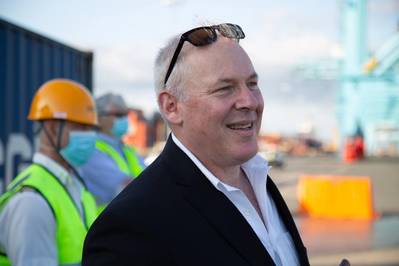 Ports are economic engines for the regions they serve, and the impact from business activities at the Port of New York/New Jersey runs as big as the area it serves: 46 million consumers in a four-hour radius. The port is an economic giant in and of itself, providing for nearly a half a million jobs, a cumulative $35 billion in personal income and a cumulative $98 billion in business income. Sam Ruda, Director, Port NY/NJ, discusses a record 2019, continued investment in infrastructure, and, of course, the impact of COVID-19 on port operations.

When Sam Ruda took over as Port Director in April 2019, it helped bring the New Jersey native’s career full circle. A graduate of Rutgers University with an economics degree, Ruda has led a maritime life, spending more than two decades in the container shipping industry with SeaLand, President’s Line and NYK, followed by a stint with NIKE managing its global supply chain and finally a dozen years running the Port of Portland.

Ruda joined the Port NY/NJ in 2015 as the assistant director, and in his time back on the East Coast the port has enjoyed steady month-on-month and year-on-year growth. NY/NJ is primarily a containerport, but it has diverse operations as a vehicle transport hub, both import and export, as well as bulk cargo, breakbulk and cruise. “2019 was a record year for the port,” said Ruda, a year that included:

“What defines this port is the water infrastructure (a 50 ft. draft); the land side infrastructure (led by the recent raising of the Bayonne Bridge) and the facilities,” said Ruda. “Prior to COVID, the cruise activity in Bayonne (RCCL) was doing well, too. We were well on our way to becoming a 1 million passenger cruise port.”

Investment strategy
Ports of all sizes require continuous investment, and Port NY/NJ is certainly no exception.

With 3,000 acres of maritime facilities, Ruda and his team are embarked on shaping and deploying the Port Master Plan which will help shape the port’s investment, activities and impact for coming generations. “Infrastructure upgrades have enabled the port to attract larger ships,” said Ruda, and rapid evolution in the size of containerships is clearly seen in the chart on page 22. “(Since deepening the channel to 50-ft.) we’ve seen year over year growth in the number of containerships over 10,000 TEU calling on the port.” Recently, the CMA CGM Brazil, at 15,000+ TEU, called Port Elizabeth the largest ever containership call in the port. On 75% of those containership calls “we are the first port of call, which is obviously a great place to be,” said Ruda.

“Investment never stops,” said Ruda. “You want to always stay ahead of the demand curve, but that can be tricky. Our Port Master Plan takes a 30-year view and tells us that we need to be planning for our next-generation waterway infrastructure and facility infrastructure now. You don’t wait 10 years, you have to start now.” 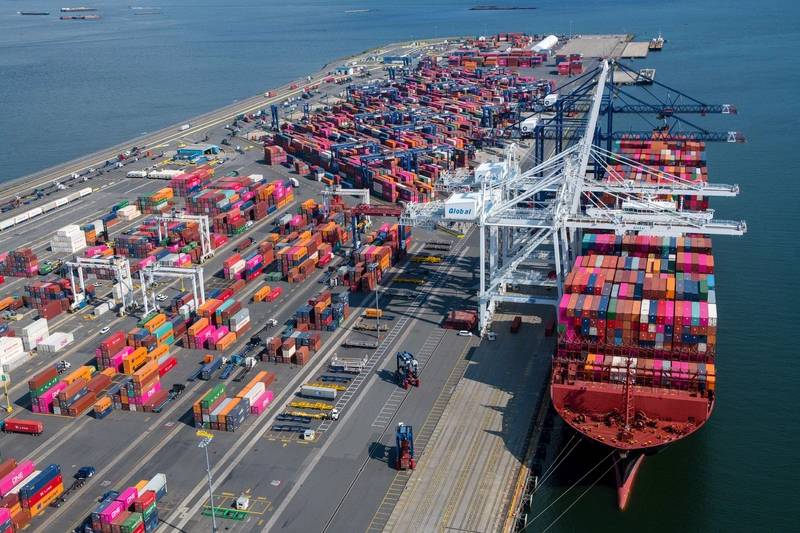 Technology drivers
While it is not a port specific technology, Ruda counts eCommerce as a primary driver in the ports planning for the coming generation. “It’s not only changing where we buy, but also how people buy,” said Ruda. “That doesn’t change that there is a container connected to the purchase; but it does drive where distribution and fulfillment centers are located. Fifteen years ago the chase was on for the cheapest land furthest from the port; we’re seeing the opposite today, and the industrial real estate market is on fire.” He said Port NY/NJ has more than one billion square feet of warehouse and distribution space within 50 miles of the port. “People are buying, and that’s encouraging.”

Internally at the port, Ruda looks at the intermodal chain holistically, as the technology swing “really is about the technology that support the activities in the port system. It’s the interface that the truckers have with the terminals. As we dive deeper into it, we talk about the truck and the containers, but we really have to start talking about the truck chasis, and about returning empty containers. This is a big opportunity for efficiency improvements, and we’re hearing a lot about it from the trucking community as to what needs to be improved in the ports sector.”

COVID-19
The COVID-19 pandemic is obviously the business story of 2020 (and beyond) and when talk turns to its impact, Ruda aid “there are multiple layers.”

First, there is the people aspect, and Ruda said port office employees have rapidly moved into the digital workspace. “We no longer pass around hard documents, it’s all eSignatures now,” said Ruda. “eSignatures have been around forever, but we really weren’t using it. Today, we are processing leases, port of entry … everything much faster and more efficiently, and this is a positive that has emerged from the COVID-19 negative. Ultimately though, it are the waterfront workers that have been on the front lines to ensure that commerce flows, and Ruda credits all stakeholders, including labor, the port authority and the employers to keep things moving. “We all decided early on that we would not rely on others for PPE equipment for waterfront labor,” said Ruda. “We brought it all in ourselves. Labor started early with temperature checks.” To that end, the port has been open as close as possible to usual, and in fact, year to date, volume is only down 8%.

“It’s amazing how resilient the maritime, waterfront, and supply chain have been,” said Ruda. “This started in late January as a supply shock when China was starting to shut down. When it was happening, it looked like it was just a China issue, but then it evolved from a supply shock to a demand shock.” While May and June were the biggest volume hits due to canceled sailings, and the cruise business has gone to zero, Ruda remains pleased that volume is off only 8% year to date, and optimistic about the future.

“The stay at home economy has really played to the container trade in many respects. There have been strong volumes in furniture, food, home goods, beer wines and spirits … I don’t want to give the impression that COVID has not impacted us, but the number of blank sailings has fallen sharply; and we’re starting to see a strong recovery.”

Port NY/NJ by the numbers: