BIMCO: Greece is the Leader in Newbuild Investment 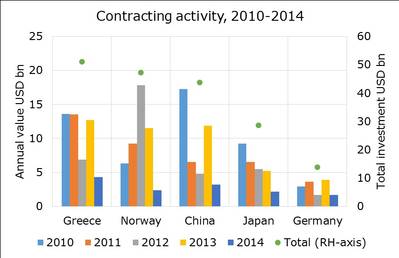 Greek shipowners are not only the most active nation when it comes to sales and purchases, they are also investing the most in newbuilding contracts, BIMCO reported. Since 2010, contracts made by owners in Greece total $51 billion (USD), consistently dwarfing the likes of Norway and China as buyers.

Chief Shipping Analyst at BIMCO, Peter Sand, said, "The Greek ship owners’ interest in newbuilding contracts has continued into 2014, where 73 new contracts valued at $4.3 billion have been signed. Due to a focus on higher value ship segments, they consistently top China on value, despite losing out on the total number of contracts signed for all years but 2013”.

The single most significant year for Norwegian shipping investors was 2012. Offshore investments made that year where so outstanding that Norway topped both tables with 133 new contracts valued at $17.8 billion. In comparison, China topped both tables in 2010 with a somewhat different focus as 643 contracts were signed at a value of $7.3 billion.

“2012 was a weak investment year for all, heavy impacted by very poor commercial market conditions for all main shipping segments. Improving conditions in 2013 meant that the appetite returned to investors across the board,” Sand added. “2014 is off to much slower start, but the ranking remains unchanged.”