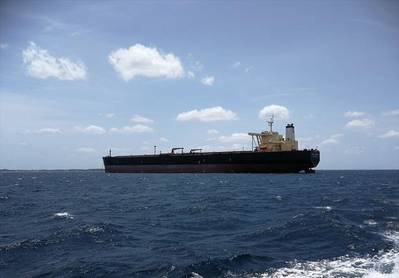 A tanker chartered by the National Iranian Oil Company (NIOC) is loading Venezuelan crude for export, documents from state-run PDVSA show, providing evidence of the two countries’ latest tactics to expand their trade in defiance of U.S. sanctions.

Venezuela and Iran have deepened their cooperation this year as Venezuela has exchanged gold and other commodities for Iranian food, condensate and fuel.

Names of scrapped vessels are being used by several PDVSA (Petroleos de Venezuela, S.A.) customers, including NIOC, to disguise the routes and identities of the tankers they use.

Also using satellite imagery and comparing it with photographs, it said the VLCC’s real identity is the Liberia-flagged Calliop. Reuters could not independently verify that as the tanker’s name at the hull had been painted black before its arrival at Jose.

PDVSA, Venezuela’s oil ministry and NIOC did not respond to requests for comment. The U.S. Treasury Department declined to comment.

Hong Kong-based Ship Management Services Ltd, which bought the Calliop in October, the shipping databases showed, could not be reached for comment.

A spokesperson for the U.S. State Department said that “reports of any impending deliveries would again illustrate the illegitimate regime in Venezuela has turned to international pariahs like Iran to enable their exploitation of Venezuela’s natural resources”.

Iran sent a VLCC named the Horse to Venezuela in September. It delivered condensate, a very light form of oil, for PDVSA to blend with its very heavy oil to formulate exportable crude.

The tanker returned to Iran in October carrying Venezuelan heavy oil for NIOC, PDVSA’s schedules showed. The tanker was misidentified at PDVSA’s databases as the Master Honey.

In the run-up to leaving office in January, U.S. President Donald Trump’s administration has tightened sanctions on Iran and Venezuela.

A handful of PDVSA’s customers that had been allowed to swap Venezuelan oil for fuel under U.S. sanctions had their authorizations suspended in October. But Washington has not intercepted vessels that contribute to the Iran-Venezuela trade.

Smaller Iranian tankers have also delivered gasoline to Venezuela, making several voyages between the two countries since May.

The U.S. Department of Justice in August seized 1.1 million barrels of Iranian gasoline bound for Venezuela on four privately-owned tankers.

The cargoes were transferred to two separate tankers that delivered the gasoline to U.S. ports for auction, in what the department said led to the largest seizure of Iranian fuel.