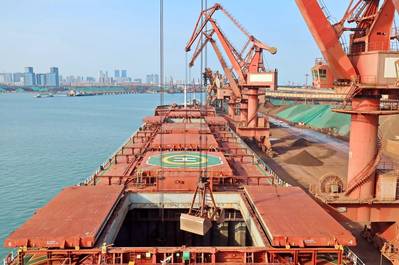 Iron ore prices have suffered their worst week for nearly 18 months amid signs that the two factors needed for a sustained correction may be coming into play - Chinese steel producer discipline and a recovery in supply of ore.

The headline reason for the retreat in iron ore has been moves by China, which buys about 70% of global seaborne volumes, to rein in its massive steel sector.

The question for the market is how far spot prices could decline as China's restricts steel output and producers begin to ship more.

The answer is probably still a wait-and-see if the early signals translate into a trend, or whether they are just a blip.

It's been no secret that the authorities in Beijing want to cap 2021 steel output at no more than 2020's record levels, but what appears to have changed is that firmer action is now being taken to achieve this aim.

Some steel producers in China's Jiangsu, Fujian and Yunnan provinces were told by the government to cut production, and there are reports that some steel mills in the top-producing city of Tangshan have curbed output amid warnings of official punishments for over-producing.

While it's early days, there are some signs of moderating output in China, the world's top steel producer.

Crude steel output declined 5.6% to 93.88 million tonnes in June from May's record 99.45 million, according to official data released on July 15.

If China really is to limit steel production in 2021 to 2020's 1.065 billion tonnes, it implies second-half output will have to be around 502 million tonnes, or almost 11% below the levels achieved in the first half.

That may end up being a stretch, especially if Beijing sticks with its past practice of prioritizing economic growth over pollution concerns.

However, if China does successfully restrict steel production in the second half, it will likely occur just as supply is starting to recover to closer to potential, as the top three exporters - Australia, Brazil and South Africa - appear set to ship more.

China's iron ore imports are on track for a strong July, with commodity analysts Kpler and Refinitiv both predicting an outcome well north of 100 million tonnes.

Kpler expects China's July imports to be around 107.4 million tonnes, the highest since October last year, while Refinitiv is even more bullish, saying monthly arrivals may stretch as high as 112.5 million tonnes, although this includes 15 vessels expected to arrive on July 31, meaning their cargoes may not make it into July's customs data.

Australia, the top shipper of the steel-making ingredient, is on track for a modest July export volume, according to Refinitiv, but this follows on June's exports of 78.04 million tonnes, which was the highest since December.

Many of the June-loading cargoes will have reached their destination ports in Asia in July.

Australia's iron ore exports are likely to recover in coming weeks with the conclusion of maintenance at a major port in Western Australia state, and fewer weather-related disruptions, although planned maintenance at another port may limit volumes.

However, number two exporter Brazil is slated for a stellar July, with Refinitiv estimating exports of 34.92 million tonnes, the most since August 2020 and up strongly from June's 30.95 million.

Third-ranked exporter South Africa, which similar to Brazil has been battling ongoing waves of coronavirus outbreaks, is also on track for a strong July with exports around 8.1 million tonnes, which would be the highest since Refinitiv started tracking cargoes in January 2015, and almost double June's 4.4 million.

The increased supply of iron ore and early signs of Chinese producer discipline are starting to show up inventories at Chinese ports <SH-TOT-IRONINV>, which rose for a fourth week to end at 129.5 million tonnes on July 23, up from 115 million for the same week in 2020.