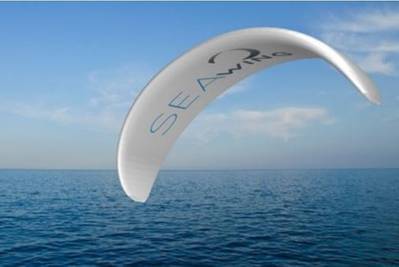 Classification society ClassNK has granted an Approval in Principle (AIP) for the Seawing system, an automated wind-powered kite capable of towing commercial ships and improving a vessel's fuel economy by 20%.

ClassNK granted the approval to the shipping company Kawasaki Kisen Kaisha, Ltd. (K Line) and Airseas, the developer of the Seawing system.

According to the developers, a simple switch launches or recovers the kite which unfolds, operates, and refolds autonomously.

The developers say that the “Seawing” system collects and analyses meteorological and oceanic data in real-time, then adapts its flight to this information in order to optimize its performance as well as to ensure maximum safety.

ClassNK released its Guidelines for Wind-Assisted Propulsion Systems for Ships in September 2019 in order to contribute to the safe integrity and design of this technology and the ships that are installed with it.

As reported previously, after 2 years of close technical and business cooperation, K Line in June 2019 announced a 20-year agreement with Airseas to install and service one ship with Seawing.

Once the first Seawing is successfully delivered, K Line will contemplate ordering up to 50 additional Seawing, it was then reported.

According to K Line, Seawing reduces the environmental footprint of a Capesize vessel by 5,200 tons of CO2 per year depending on the vessel voyage route.